1964-present
Cameron Arthur "Cam" Clarke is an American voice actor and singer, who is best known for providing the voices of Leonardo and Rocksteady in the original 1987 series of Teenage Mutant Ninja Turtles, as well as the original voice of Shotaro Kaneda in the 1988 anime film, Akira. His other well-known roles include voicing the titular character in the 2002 reboot of He-Man and the Masters of the Universe, Liquid Snake in the Metal Gear video games, Mac in PBS Kids' Clifford the Big Red Dog, and Freddy the Ferret in Barnyard and its spin-off TV series.

For Disney, Clarke is the current voice of Simba, taking Matthew Broderick's place. He also did the singing voice for Simba in The Lion King II: Simba's Pride, and voiced Aladdin in the Disney Sing-Along video Beach Party at Walt Disney World. Additionally, he voiced R.R. Rapide and Whirlybird in the Playhouse Disney/Disney Junior series Special Agent Oso. He has also provided additional voices in the 2014 Disney animated feature film, Big Hero 6. Various other roles are listed below.

Flounder
(The Little Mermaid II: Return to the Sea) 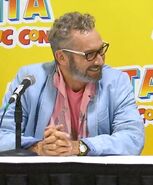