Raddix Madden
Cameron Michelle Diaz is an American former actress, producer, author, and fashion model. She is best known for her role as Mary Jensen in the 1998 comedy There's Something about Mary, Natalie Cook in the 2000 film, Charlie's Angels and its 2003 sequel, and for voicing Princess Fiona in DreamWorks' Shrek films.

For Disney, she portrayed Jenny Everdeane in the 2002 Touchstone Pictures/Miramax film, Gangs of New York. 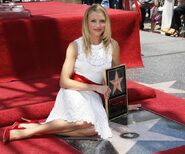 Cameron Diaz at her Hollywood Walk of Fame ceremony in June 2009.