Cameron O. Parks is Chyna's high schooler brother. He tries to avoid Chyna and the other A.N.T.s due to their younger age and because he's afraid they will spill out one of his biggest secrets. Even though he's older, he spends a lot of time in her shadow. While she’s a prodigy, he’s not especially gifted at anything. However, he is determined to find something in which he excels at (Other than being famous; which occurred when his video "Cameron Parks: Space Cadet" went viral).

He’s not thrilled that his kid sister is at his school, so he tries to keep his distance. But, when push comes to shove, Cameron will step up to help her. Though more often than not, she even comes to his rescue. Chyna and her friends, Olive and Fletcher, constantly embarrass him in front of the other high school students. For example, Olive showed his blankie to the big kids. He does, though, stick up for Chyna where it counts, such as standing up to Lexi. Cameron is also kind of suspicious about Fletcher around Chyna. He is very interested in girls and considers himself a ladies' man, often flirting with girls. He opened a club called the "End Hunger Today Club" which only consists of he and Fletcher. Instead of ending world hunger, he uses school funds and donations to buy Fletcher and himself buffalo wings. He validates his greediness by saying that if he helps just one person, he's making a difference. He is also Olive's locker neighbor, much to his annoyance and irritation.

In TransplANTed, he is upset that Chyna is going to his high school, although he later defends Chyna when Lexi says that Chyna was terrible and horrible. He tells her that she was his sister and he was trying to hear her sing. Lexi was shocked that he stood up to her.

Cameron is always eating food. In ParticipANTs, he founded a fraud club for his personal gain and all he did was eat buffalo wings. In his baby pictures, he always had a bowl of spaghetti on his head in 2 scenes.

In the episode The PhANTom locker he gets annoyed with Olive embarrassing him and tricks her into thinking that her locker is haunted. He later pretends to be a leprechaun ghost while doing the jerk to keep Olive away.

In SciANTs Fair, he and Lexi find Skidmore's cell phone and make some calls to stop teachers from giving homework/studying/etc.

In StudANT Council, he gets jealous of Fletcher hanging out with his dad too much and tries to bond.

In The InformANT, his dad gets him stuff from the evidence locker that he doesn't like.

In ReplicANT, he enters the Donkey King tournament against Olive and tries to stop her from winning.

In ClairvoyANT, he is dismayed when everyone but him receive Wacky Awards, so Chyna and Olive try to help him find his talent which he believes is psychic.

In ManagemANT, he accidentally uploads a video of Chyna singing on the internet instead of his movies.

In PhilANThropy, he helps Lexi after she unfairly wins a beauty pageant so he dresses as an old man.

In IgnorANTs Is Bliss, he enters Gibson's dog show because he broke Chyna's ANT Pad trying playing on a boxing app.

In Slumber Party ANTics, he enlists Fletcher to draw a comic book with him.

In America Needs TalANT, he, along with Fletcher and his dad, wait in line at a popular food truck for 2 days.

In You're the One That I wANT, he learns that Gibson has been living at school and offers to rent out his family's living room for him.

IN PerformANTs, he tries to get backstage at a Blood Butcher concert.

In Ballet DANTser, he takes Driver's Ed with Paisley taught by his dad.

Relationships with Other Characters

He seems to be irritated that she moved into high school with him, he also thinks that it's not fair that she has a special talent and he doesn't. However, he will stand up to her whenever push comes to shove.

He thinks she is extremely annoying, like in PhANTom Locker when she was trying to embarrassing him

He is somewhat jealous because he has spent a lot of time with his dad, but otherwise, they are not seen together much, although they work on a comic book together in Slumber Party ANTics.

They are somewhat friends. For example, they work together in SciANTs Fair when they steal Principal Skidmore's phone.

They are friends and are mostly seen together with Lexi.

Vanessa is Cameron's current and possibly first girlfriend. He imagined her at a dance, only to find that she wasn't there. He then met her for real when she couldn't see, and he pretended to be everything she wanted a guy to be. But he found out that she liked him for who he was. In ANTswers, Cameron thinks she is an alien, but he reveals that even if she was an alien, he would always love her. 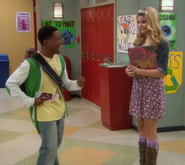 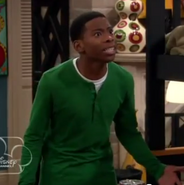 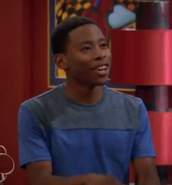 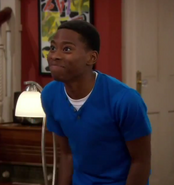 Add a photo to this gallery
Retrieved from "https://disney.fandom.com/wiki/Cameron_Parks?oldid=3571161"
Community content is available under CC-BY-SA unless otherwise noted.