Let's Go to the Circus!
Campout at Walt Disney World is a Disney home video, originally released as part of the Mickey's Fun Songs series on February 2, 1994, and then re-released under the Sing-Along Songs banner in 1996, and then on DVD in 2005.

Now your kids can join Mickey and the gang in fun-filled musical adventures while learning easy-to-sing favorite kid songs! In Campout at Walt Disney World, Mickey, Minnie, Donald, Goofy and the Fun Songs Kids pitch their tents and explore Discovery Island, River Country, and even participate in a Talent Show! It's the most fun you'll have on a campout!

Mickey and the gang spend time in the great outdoors at Fort Wilderness at Walt Disney World.

The film starts with Mickey, Donald, Goofy, Minnie, Huey, Dewey, Louie, the kids, and the rest of the gang riding their omnibus all the way to Fort Wilderness while singing "Comin' Round the Mountain". When they get there, they bring out their camping gear and fall in line. Goofy then unfortunately gets left behind. Meanwhile, the rest of the gang explores the camping place as they finish the song while Goofy catches up with them. Goofy looks around and asks what they should do now. Mickey suggests that he and the rest must look for "The Bare Necessities". Mickey agrees and he and the rest do it as they sing the song. The Country Bears join in the song too. Meanwhile, Donald pitches up the big tent for the kids, but Huey, Dewey, and Louie accidentally crush it to infuriate him. Later, Mickey and the rest head back.

Meanwhile, Donald enjoys the daytime campfire. Donald is seen cooking his soup to share with all his friends. But suddenly, the Country Bears come out of the trees and the bushes and start to sing "Oh, Susanna!" while ruining the campsite. Donald tries to get rid of the bears, but they cannot stop.

A few of the kids come to Donald, Minnie, Mickey, and Goofy and tell them that it's time for the races. The kids do different kinds of races such as regular running, sack racing, three-legged racing, two hand walking, and slow running. After they head to the finish line, Donald and Minnie give each the kids a ribbon ("Camptown Races").

Mickey, Donald, and all of their friends then enjoy outdoor activities by the seaside ("By the Beautiful Sea"). At the end of the song, when Donald is trying to catch a fish, Huey, Dewey, and Louie prank him into catching a rubber chicken instead.

Next, the kids head to the cart (pulled by two horses) where Mickey, Minnie, and Goofy are. Together, they ride all the way through the countryside as they sing "Don't Fence Me In". They stop by the dance square and perform "Turkey in the Straw".

At the Hoop-Dee-Doo Musical Revue, Mickey and his gang prepare for the talent show ("Talent Round-Up") with props and rehearsals. Minnie presents two of the musical numbers "Jeepers Creepers" and "Mountain Greenery" and kids telling jokes. Chip and Dale, Huey, Dewey, Louie, Shaker, Wendell, Liver Lips and Big Al appear as the audience.

That night after the show, they gather around the campfire and roast marshmallows ("Country Roads"). Then they sing a medley of "If You're Happy and You Know It" and "Goodnight Campers" along with Chip and Dale and the Country Bears joining in. Then the Country Bears, Chip, and Dale bid them good night as they slink off back to the forest and Mickey and his friends go to sleep by the campfire.

The 1996 VHS release of Campout at Walt Disney World.

The 2005 DVD release of Campout at Walt Disney World. 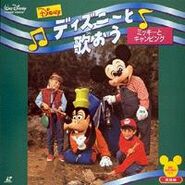 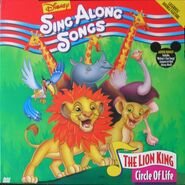 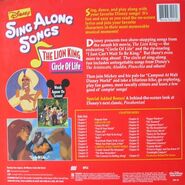 The 1994 laserdisc release, with Disney's Sing-Along Songs: Circle of Life (back)

Jessica and Tiffany in Campout at Walt Disney World.

All of the kids during the picnic games.