October 1, 1982
The Canada Pavilion is part of World Showcase in Epcot at the Walt Disney World Resort.

Prior to the construction of the pavilion, Walt Disney Productions sought financial support for the themed pavilion from the Canadian government. The company wanted the federal government to fund the cost of building the attraction; in return, the government would have input into the design and layout. The Canadian government was concerned about the stereotype of Canada that Disney wanted (i.e. lumberjacks). Funding was refused and Disney threatened to pull the exhibit, but ultimately did not.

At one time during planning, the pavilion was to have been divided by a main street of shops and restaurants, with one side representing French Canada and the other English Canada.

At the opening together with the park on October 1, 1982, the original musical talent for the Canadian pavilion was a trio called the "Caledonian Pipe Band", consisting of two pipers and one drummer. The performers were Robert "Bob" Proctor (lead drummer) and brothers Kenneth Mauchin (piper) and Robert Mauchin (also a piper). They were recruited by Ron Rodriguez (talent co-ordinator for Walt Disney World) from the Rosie O'Grady's Pipe Band of Orlando. Because all three had ties to Scotland, they also performed at the nearby United Kingdom Pavilion at various times.

The Canada Pavilion is designed to remind guests of the Canadian outdoors. It includes a canyon, a waterfall, gardens, a pool with fountains and totem poles. The main attraction is O Canada!, a Circle-Vision 360° movie that takes guests on a tour of the country, including its landmarks, cities, scenery, and people. The pavilion also includes Le Cellier Steakhouse and the semi-permanent home of the Celtic rock band Off Kilter, which was replaced by a show featuring a Canadian lumberjack competition.

The pavilion has three native totem poles, up to 30' in height. Two are made of fiberglass, and one is carved out of wood. The wooden totem pole depicts three stories of the "Raven" tricking the "Sky Chief" into the release of sun, moon, and stars from a chest. It was carved by the British Columbia artist David Boxley, and was officially put on display in April 1998.

The Victoria Gardens which are adjacent to the Hotel du Canada are inspired by the Butchart Gardens near Victoria, British Columbia. The gardens are the largest (and most labour intensive) of all the national pavilions. 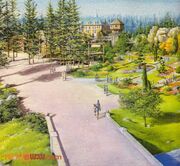