Phineas and Ferb: Across the 2nd Dimension

Leader of The Resistance (formerly)

To put an end to the reign of Doofenshmirtz-2 (succeeded). to free the animal agents of their evil programming (succeeded), to put the Doofenshmirtz family into custody for their crimes (failed)

Anything that puts her family in danger, the ruthless Doofenshmirtz family

"I'll do whatever it takes to protect the ones I love."
"Doofenshmirtz is going DOWN, DOWN, DOWN."
Candace Gertrude Flynn, or Candaze-2, is the 2nd Dimension counterpart of Candace Flynn. She is the leader of The Resistance against Heinz Doofenshmirtz. She is essentially an exact duplicate of the 1st Dimension Candace Flynn that had grown up with a different life and therefore has different motives for her existence.

Unlike her 1st Dimension counterpart, Candace doesn't display the typical behavior of a teenage girl, although it is presumed that she eventually does after the film's events. They do, however, share certain personality traits. Such traits include their controlling attitude, which she carries more of as the leader of the opposition, and her defiance and resilience, which has under separate circumstances molded her in a different manner into a different person. She is obsessed with overthrowing Doofenshmirtz the same way her first dimension counterpart is with getting her brothers grounded. As said by her to the first dimension Candace during an exchange in the mine carts: "He is going down, down, down!"

She is earnestly devoted to the safety of everyone she cares about, particularly her brothers, Phineas and Ferb, and is terrified of losing them. For that reason, she'd even prohibited them from joining the Resistance for their own safety until they proved their ability.

As warm and protective as she is to those close to her, she is cold and merciless towards those who threaten them and lives her life with the determination of their pursuit and destruction. That includes the ruthless Doofenshmirtz family of her dimension.

Candace is physically identical to her 1st Dimension counterpart, aside from her apparel. When at home, she wears the standard issued white shirt and 'dooferalls'. When on duty, she wears a low-cut sleeveless midriff, a black skirt, black shoes with black stockings (which appear as really tall boots), a black bandana, and a pair of black sunglasses, which she most probably wears to hide her emotions during combat. She carries around a satchel and wears a utility belt around her waist.

She is highly skilled at close and medium-range combat when using her Bo staff. Being a lethal martial arts fighter, Candace demonstrates remarkable agility over Doofenshmirtz' Norm Bots and can easily destroy them when they are in small to medium-sized groups. Her fighting style is ruthless and brutal. However, she almost seems to be a match against Charlene Doofenshmirtz, who is more experienced in the same skills in combat with a bo staff.

Candace was first seen by Phineas-1 and Ferb-1 at the Flynn-Fletcher household in her standard civilian clothing right as she denied having seen duplicates of her brothers in the living room and left.

She was revealed as the opposition leader after they were escorted into the Resistance headquarters by Buford-2. When they solicited her cooperation to rescue Perry-1 from Doofenshmirtz, she initially declined, saying it was "their fight", but shortly later changed her mind and took the group, including a recently-arrived Candace-1 into a mining cart transport system to bring them to Doofenshmirtz' headquarters.

Upon arriving underneath DEI, Candace began to doubt that the task at hand would be accomplished as easily as planned, and when Phineas-1, Ferb-1, Candace-1, Isabella-2, and Buford-2 were nearly captured by the Doofenshmirtzes when they managed to reach Perry, she took them and fled in the mine carts. When the Norm Bots followed in pursuit, she at first attempted to fight them off before realizing their odds after the mine carts are damaged and making the decision to separate the end of the train carrying the 1st Dimension counterparts, allowing them to be captured.

However, she later regretted this decision, as revealed when she broke into the Goozim room and tossed a handheld version of Doofenshmirtz-1's Otherdimensionator to Phineas, who used it to escape into the inter-dimensional stream with the rest of his group and a betrayed Doofenshmirtz. Unfortunately, the rescue was at her expense, and she was subdued by the defending Norm Bot battalion before she could escape. To her luck, however, Jeremy-2 along with Phineas-2 and Ferb-2 broke into her prison cell shortly thereafter and freed her.

After the battle for the Tri-State Area, she congratulated the 1st Dimension characters for managing to end Doofenshmirtz-2's reign of terror and ultimately bring him into custody, but felt her life would go nowhere now that it has been achieved. When Candace-1 advised she take up the endeavors of an average teenager, she replied saying she'd "take it under consideration". She bid her first dimension counterpart and everyone else a farewell before returning to her dimension, likely to begin a new life.

In "Tales from the Resistance: Back to the 2nd Dimension", Candace felt in a moment of relief that she won't have to worry about living the endeavors of a teenager. However, she feels that evil will still be striking in Danville again, and her desire to keep Danville safe from evil start to conflict with her new interest in forming a relationship with Jeremy. Also, she now has to deal about the disappearances of many of O.W.C.A.'s agents after being contacted by Major Monogram of the situation. Eventually, Candace soon spots two giant ant-robots threatening the boys and has Isabella to break off one of the legs from the walking one while she deals with the flying one. However, despite managing to destroy the flying ant robot by sending it crashing into a tree, Candace is informed by Phineas that Perry has been kidnapped by several animal cyborgs (presumably to be the missing agents).

Wanting to find out what's going on, Candace pays a visit to Doofenshmirtz in his cell, where he confesses that a certain family member of his is responsible for capturing the agents and turning them into cyborgs. At first, Candace believes that his daughter Vanessa is the culprit, but Heinz states that it's his ex-wife Charlene who did the deed, not Vanessa. After Perry is rescued by Phineas and the Firestorm Girls, Candace decides to pursue the situation further by going over to Charlene's penthouse with Phineas and Perry. She even coerced Doofenshmirtz to help her along by threatening to take away his toy train while he can still remain in prison.

After reaching Charlene's penthouse and meeting the woman herself, she is surprised to learn that both Doofenshmirtz and Charlene were never divorced and has pretended to be for several financial advantages, such as tax records and coupon mail. Eventually, having anticipated Candace's arrival, Charlene sets her cyborgs to imprison Candace, Phineas, and Perry in her lair. However, the three were freed by Ferb (who pretended that he was turned into a cyborg by Charlene) and the Resistance arrives by using the remaining giant ant robot. This resulted into a fight between the Resistance and the cyborgs, and Candace engages into a bo staff fight with Charlene. Following the battle, all of the cyborgs are relieved of their evil programming (except for Pandaborg), and Candace manages to defeat Charlene. Before she can put the evil couple into custody, she is interrupted by the arrival of Vanessa, who convinces Candace to let her have a moment with her parents. However, it was all a trick as Vanessa takes the opportunity to help her family and Pandaborg escape in a hover car driven by her boyfriend Tony Marzulo, much to Candace's anger. Despite the Doofenshmirtz family's escape, Candace attends the reunion of all returned O.W.C.A. agents before announcing her decision to quit the Resistance, assuring to an objecting Monogram that he and his agents can be able to track down the notorious Doofenshmirtz family and bring them to justice without her assistance, and that she'll be coming around if they need her the most. She then happily settles her attention to Jeremy, presumably to start a relationship with him.

Candace wondering if Vanessa is responsible for Platyborg's kidnapping 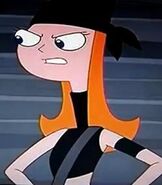 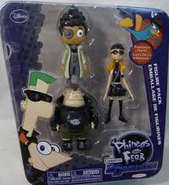 Retrieved from "https://disney.fandom.com/wiki/Candace_Flynn_(2nd_Dimension)?oldid=4111358"
Community content is available under CC-BY-SA unless otherwise noted.