Gabby Milo
Candice Anne Rose "Candi" Milo is an American voice actress and singer. She has voiced various characters in many animated series such as Madame Foster, Cheese, and others on Cartoon Network's Foster's Home for Imaginary Friends and Snap on Nickeloden's Chalkzone'.

For Disney, she voiced Jacobo Jacobo (and other various characters including Shelley Klutzberry) in The Replacements, Thundra in the Aladdin TV series, Angelica in the 101 Dalmatians: The Series episode Cupid Pups, and several voices in Fillmore!, The Emperor's New School, Pepper Ann, and even lent her vocal performance for Disneyland entertainment.

She was also the voice of Irma Lair in W.I.T.C.H. and Ms. Diaz in the Playhouse Disney series Stanley. 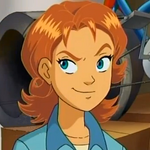 Baroness Bonbon
Add a photo to this gallery
Retrieved from "https://disney.fandom.com/wiki/Candi_Milo?oldid=3527551"
Community content is available under CC-BY-SA unless otherwise noted.