http://www.capcom.co.jp
http://www.capcom.com/
Capcom Co., Ltd. is a Japanese developer and publisher of video games, known for creating multi-million-selling franchises such as Resident Evil, Street Fighter, Mega Man, Devil May Cry, the Ace Attorney, Monster Hunter, Sengoku Basara, Dead Rising, and many other franchises. Capcom is also well known for the Versus series of crossover games like Marvel vs. Capcom, which began well before the Walt Disney Company bought Marvel Entertainment in 2009. Originally established in 1983, it has since become an international enterprise with branches and subsidiaries in North America, Europe, and East Asia.

Many video games based on Disney properties were developed and/or published by Capcom, particularly for Nintendo game systems, especially between 1988 and 1994.

Capcom's history with Disney dates back to the 1980s, when they published DuckTales for the NES and Game Boy. They continued to publish Disney games from the 1990s through the early 2000s.

Adventures in the Magic Kingdom (NES) 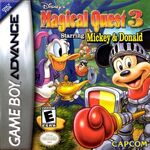 The Disney Afternoon Collection (PlayStation 4, Xbox One, and PC)

In addition to having a history with Disney, Capcom also has a history with Marvel. Capcom's history with Marvel dates back to the mid-1990s, well before Disney's acquisition of Marvel in 2009. Capcom's first Marvel-licensed game was The Punisher, published in 1993. Then the Marvel vs. Capcom crossover fighting game series was developed on the basis of the X-Men: Children of the Atom.