To please Scar and hunt in the Pridelands

Cape Dogs are a group of wild canines that were set to appear in The Lion King.

In an early draft for The Lion King, the cape dogs appeared alongside Scar as his minions and comrades. They were to aid Scar in his scheme to kill Mheetu and Simba in a wildebeest stampede. The dogs were eventually replaced by Shenzi, Banzai, and Ed, whose roles were virtually identical to the one the cape dogs would have filled.

Concept artwork of the cape dogs who would eventually become Shenzi, Banzai, and Ed 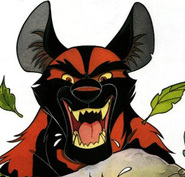 Retrieved from "https://disney.fandom.com/wiki/Cape_Dogs?oldid=3399883"
Community content is available under CC-BY-SA unless otherwise noted.