Still Standing
Cape Suzette is the fictional animal-dominated city from TaleSpin. It is home to Baloo, Rebecca Cunningham and her daughter Molly, Kit Cloudkicker, and Wildcat.

The headquarters for plane delivery service company Higher for Hire is located there as well as the main headquarters of Khan Industries, run by Shere Khan. It is also a pillaging ground for Air Pirates.

Its climate is somewhat like the central or southern California coastlines; as revealed in the Christmas episode, "Jolly Molly Christmas", it never snows in Cape Suzette. 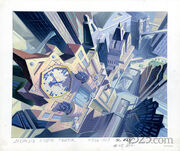 Cape Suzette as it appears in the DuckTales reboot