The puppies being safe

The puppies in danger

The physical strength of a horse

The Captain is a gray horse who wears a red British military horse blanket in Disney's 1961 animated film 101 Dalmatians. He is an ally in the mission to rescue the puppies along with the Colonel, his sheepdog leader, and Sergeant Tibbs, a tabby cat.

The Captain serves as the Colonel's lieutenant and informs him or Tibbs whenever there is an alert. He can be very bossy at times and is shown to have the ability to neigh loudly. However, his neighing is often used to get a sleeping Tibbs to wake up and report to the Colonel. Like Tibbs and the Colonel, the Captain has been shown to be courageous and resourceful in rescuing the puppies from Cruella. Before residing on a farm, he apparently served in the British Army, due to the sign over the farm's gate that identifies the farm as belonging to a retired British cavalry officer.

The Captain first appears at the barn where he hears old Towser's bark and realizes it's an alert. The horse wakes up Sgt. Tibbs the cat and orders him to report the alert to the Colonel, to which he does. When Tibbs and the Colonel return, the Captain tells the Colonel that the alert is from Towser at Withermarsh. The Colonel barks in response to the alert and receives news from Towser that 15 puppies from London have been stolen. Tibbs then informs the Captain and Colonel that he heard puppy barking over at Hell Hall (the Old De Vil Place) two nights ago, which the Colonel initially doesn't believe because no one has lived there for years.

Then the Captain spots the Baduns coming in their truck, so Pongo, Perdita, and the puppies decide to leave. The Captain, the Colonel, and Tibbs wish them good luck and promise to hold off Jasper and Horace. While the Baduns are distracted by the Colonel, the Captain, with Tibbs' help, manages to hit both of the villains in the rear with his back left hoof, sending them into the wall. The Captain doesn't appear nor is he mentioned throughout the rest of the film after this scene.

In the live-action adaptation of the movie, as a clydesdale, the Captain is instead named "Punch." He is the first of the barn animals to receive the Twilight Bark message and summons Fogey (the Colonel) to listen by stamping his hoof and whinnying. When Cruella later arrives, looking for the puppies, Punch kicks open the doors she is standing in front of, causing her to be thrown across the farmyard. Later, Cruella taunts the animals (who had foiled her plans) on their meat-processing fates and bursts out laughing with lightning strikes (despite the sky not being covered in clouds). Punch becomes enraged and stomps down on a floorboard, sending Cruella flying through the roof and into the pigsty before the police quickly arrive to arrest her.

In the series, the Captain didn't have much of a speaking role. He was either seen as pulling carts or being spooked, bucking whoever spooked him. He had a speaking role in two episodes, one of which is "The Artist Formerly Known as Spot", when he cautions the pups on using the mechanism, which Nanny hooked up to him, to help paint the Chow Tower.

He also speaks in "Goose Pimples (Goose Pamples)", where the pups get scared after hearing thudding footsteps and a clanging noise, whilst camping out in the forest, thinking it's a monster that Lt. Pug had told them about. The noises, however, turned out to be the Captain's hoof steps. He was giving a hay wagon ride to the other Dalmatians that night. He offers Lucky, Rolly and Spot join him, revealing the clanging to be the noise of the hay wagon opening. 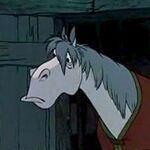 Captain with Colonel and Tibbs

Captain in 101 Dalmatians: The Series

Captain in the 1996 live action film.

Captain shocked at seeing Rolly & Cydne in his pen