Disney Wiki
Register
Don't have an account?
Sign In
Advertisement
in: Objects, The Avengers, Weapons,
and 12 more

To defend, block, and attack enemies

Captain America's shield appears 1 hr 25 min 23 sec into the movie at the point where Pepper Potts comes in on Tony trying to get out of his damaged armor; the shield is visible in the distance below Tony's right arm. According to a tie-in comic, Tony's father Howard Stark created the shield. Tony subsequently used the alloy of a prototype to create his armor.

Steve Rogers uses an ornamental version of the triangular shield during a musical tour promoting War Bonds, which he then uses in his first field mission. Rogers later acquires the familiar circular shield from Howard Stark. Rogers chooses the unadorned vibranium shield (actually a prototype) over several more advanced models based on the triangular shield. The Vibranium prototype shield proved to be the perfect weapon for Steve. As Captan America he accomplished amazing feats with it. Aside from bashing HYDRA soldiers and blocking incoming attacks, Rogers was able to throw it with near perfect aim and have it ricochet back to him.

Captain America's shield proved most effective in his confrontation with Thor as it absorbed the full impact from Mjolnir, Thor's mystical hammer, and causes a massive shock-wave to the surrounding forrest area. Captain America uses the shield again in the battle with the Chitauri in New York City to shield his teammates as well himself. Iron Man uses his Repulsors rays on Cap's shield to launch an effective counter strike attack on Chitauri unit. Cap then uses the shield to protect himself from a grenade blast that sends him hurtling out a window and to the street below unto the car roof. Because of the Shield structure Cap was able to curl himself and protect himself from receiving extensive injuries.

Caps's shield is seen throughout the film. First on the mission with Black Widow, where he uses it to doge and block. Then again when he is in pursuit of Bucky Barnes, who is acting as the Winter Soldier. The Winter Soldier is able to intercept the shield by grabbing it and then tosses it right back to Cap intensely. Steve uses it it in combat again and throughout.

Steve uses the shield throughout the film, but drops it at the end when he confronting Iron Man and Tony says that his father made the shield and Steve is not worthy of using it because he is protecting Bucky, who murdered Howard Stark while acting as the Winter Soldier.

Cap receives back the shield from Tony Stark and would go on and reuse the shield during the Avengers final battle against Thanos. After Steve decided to live his life in the past, during the 1940's with Peggy Carter, he returned to 2023 as an old man to pass the mantle of Captain America to Sam Wilson by giving the shield to him.

Hesitating to take the legacy of Captain America for himself, Sam later gives the shield to the Smithsonian National Air and Space Museum, claiming that Steve is the only person worthy to carry it. However, sometime after, the government decides to give the shield to John Walker, naming him the new Captain America without Sam's consent. This leaves Bucky, who had approved Steve giving the shield to Sam, and Sam deeply frustrated.

Afterwards, when Walker brutally kills a member of the Flag Smashers in front of a crowd of people using the shield, Sam and Bucky decide to confront him. They manage to beat Walker and take the shield from him, with Bucky returning it to Sam. With the possession of the shield again, Sam finally decides to keep it and starts to train with it. Meanwhile, John Walker is stripped of his title of Captain America, but then decides to make a replica of the shield for himself.

The shield appears in episode 1, "What If... Captain Carter Were The First Avenger?". It appears in an alternate universe where Peggy Carter takes the Super Soldier Serum and becomes Captain Carter. Howard Stark gives Peggy a version of the shield, but with the British flag on the front, representing Peggy's nationality.

'Doctor Strange in the Multiverse of Madness

An alternate version of the shield appears as Captain Carter's shield from Earth-838.

Captain America's Shield is a very unique and powerful shield that can withstand any blow or blast and can be thrown very hard at the target then bouncing to other foes before going back to Captain America, the main user.

The shield can be spotted in Horace Horsecollar's T-shirt in the short Get a Horse!.

In Free Guy, during Guy's battle against Dude, he invokes Captain America's shield from his arsenal, much to Chris Evans' shock. 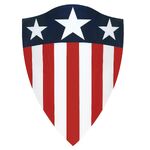 Making a cameo in Iron Man 2.

Appearance in The Avengers. 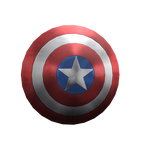 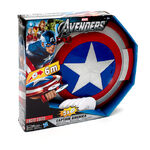 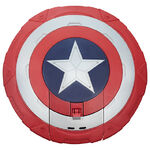 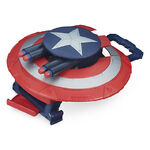 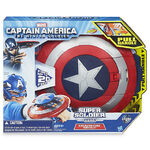