His position, learning about Earth, His plants

Captain B. McCrea (or simply The Captain) is one of the two tritagonists of the 2008 Disney/Pixar animated feature film, WALL-E. He is the Axiom's captain and commander.

Like the rest of humanity, he was extremely obese, and almost always confined to a hoverchair. Most of the day-to-day management of the ship was handled by AUTO and the ship's computer. However, on the Axiom's 700th anniversary, a probe ship returned with evidence of life on Earth. The Captain, while still not truly understanding what a plant even was, let alone what it meant to go home, was nonetheless intrigued by the concept, and was amazed when he discovered the Operation Manual for Operation Recolonize, the first tool he had ever seen that was not voice-controlled. However, the EVE probe was lacking the said plant.

McCrea assumed that EVE was malfunctioning, and had GO-4 send her to the Repair Ward. Much to his surprise, WALL-E had managed to follow EVE into the control room and subsequently introduced himself to McCrea with a handshake. Upon seeing the dirt that had come from WALL-E's hand, the confused Captain asks for the robot to be cleaned up. However, McCrea saved the dirt and had the computer analyze it, which led to him researching about Earth. He quickly became fascinated by all of the different things and customs that he had seen.

Eventually, EVE brought him the plant, which had been stolen by GO-4. McCrea was overjoyed that they could go back home for the first time, and quickly used a projector to see EVE's footage of her time on Earth. However, much to his shock and horror, the recordings showed a barren wasteland, nothing like the beautiful Earth that he had seen and expected. After watering the plant, it dawned on McCrea that the Axiom needed to return to Earth, and called Auto down to his room. However, Auto instead insisted that the plant was given to him, and they could not go home. The confused McCrea demanded to know why. Auto claimed that it was "classified", and only revealed the truth when McCrea gave him a direct order to do so.

Auto revealed Directive A-113, a message from Shelby Forthright that Operation Cleanup was a failure and that life was unsustainable on Earth; the auto-pilots were to take control of everything, and none of the ships were to return to Earth. McCrea tried to persuade Auto otherwise, as the message was nearly seven hundred years old, and that the plant was living proof that Forthright was wrong. However, Auto is unable to disobey his directive.

Noticing the pictures of all the captains from generations down, McCrea notices that AUTO is in every image, meaning he was the true captain of the Axiom, not them. Putting on his hat properly and knowing that his predecessors were counting on him, McCrea firmly states they are going home today. Unfortunately, Auto's directive surpasses McCrea's orders, and he stages a mutiny. GO-4 takes the plant from McCrea, and it is only (and unintentionally) saved by WALL-E, who had climbed up the garbage chute to find EVE. McCrea is forced to watch as Auto tasers WALL-E (severely damaging him in the process), sends him and EVE down the garbage chute, and locks the furious Captain in his room, terminating all outside communications.

After banging on the elevator door in a futile attempt to get back to the control room, McCrea notices the Rogue Robots message that had been posted for WALL-E and EVE, who had managed to escape with the plant. McCrea uses whatever tech in his room to get a message to EVE and WALL-E, telling them to get to the Lido Deck. Using a picture of WALL-E with the plant, which he had gotten from EVE's recordings, McCrea tricks Auto into thinking he has it and challenges him to come to get it. When Auto comes into his room, McCrea grabs him and manages to get into the control room. The two fight for control of the ship, with McCrea unintentionally destroying GO-4 in the process.

Eventually, McCrea is able to bring up the holo-detector. The fight continues until Auto throws McCrea to the ground and tries to turn off the holo-detector. WALL-E manages to keep the device open and eventually wedges himself inside in a desperate attempt to barely keep it open. McCrea finally gains the strength to stand up on his own and manages to hit Auto's "manual button", which deactivates him.

Everyone gets the plant into the holo-detector, jumping the Axiom back to Earth. At the end of the film, McCrea is seen showing the kids how to farm, saying that it was good to be home.

The Disney Wiki has an article focusing on the relationships of Captain B. McCrea.

The Captain hovers to work

McCrea being goofy and imagines returning to Earth

"Sir, I insist you give me the plant."

McCrea finally stands up for the first time

McCrea defeats Auto by deactivating him

First time back on Earth 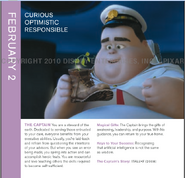