“Great work!”
―Captain Beakman in Time to Fly With T.O.T.S

Captain Beakman is the leader of T.O.T.S. She is a pelican and she oversees the delivery services, as well as every other little detail that goes on at the HQ.

Captain Beakman is a pelican with purple hair, a lavender uniform and brown eyes.

Captain Beakman is very supportive to Pip and Freddy, personally choosing them to become T.O.T.S. junior fliers. She is kind, helpful, and believes in spreading love and making babies happy before they go to their forever family. She selected Pip and Freddy herself, as the first flamingo/penguin team because she believes every bird deserves a chance. Over the series she has shown how much faith and trust she has in them.

In Season Two, she selected Pip and Freddy as fliers of the month because they always make babies happy, especially her little Mia.

Also, it is revealed she has a sister named Cora and brother-in-law named Sam. Because her sister Cora is a practical joker, Captain Beakman has been revealed to be very observant when it comes to pranks-- especially on April Fools Day-- yet for the same reason, she's also open minded and loves surprises, thus is willing to congratulate anyone who is actually capable of fooling her.

She adopted an adorable kitten, Mia, as her daughter. She is shown to be a good mother. She enjoys spending time with Mia, especially at bedtime. 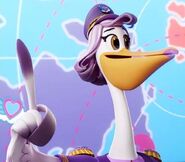 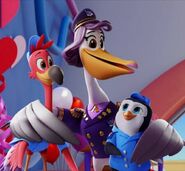