Captain Hook's Galley was a restaurant at Disneyland and Disneyland Paris that was installed aboard a representation of The Jolly Roger from Peter Pan.

A restaurant with the same name, but not set aboard a pirate ship, still exists at Tokyo Disneyland. A Pirate Ship and Skull Rock display is set to be built at Tokyo DisneySea as part of a major expansion to the park, though it may not actually host a restaurant inside.

Captain Hook's Galley opened with Disneyland in 1955 under the name of the Chicken of the Sea Pirate Ship. It was one of the central icons of the original Fantasyland and would be further expanded in 1960 with the addition of Skull Rock and waterfalls as a backdrop for a new seating area. In 1969, Chicken of the Sea would drop their sponsorship and it took on the Captain Hook's Galley name. In 1982, it would close for the New Fantasyland expansion. The original plan was to relocate the ship to a new spot by the Small World Promenade, but water damage and wood rot made moving the ship impossible without breaking it, so it was torn down. Props and rigging from the ship were saved and re-used for the refurbishment of the ship in Peter Pan's Flight.

As a tribute to the original pirate ship, Captain Hook's Galley would open at Disneyland Paris in 1992 as part of Adventure Isle in Adventureland. This would put it in close proximity to both the Pirates of the Caribbean attraction and Peter Pan's Flight over on the edge of Fantasyland, forming a "Pirate's triangle" of attractions. During a restoration of the ship in 2011 however, the restaurant facilities were removed and the ship simply became a walkthrough attraction simply called the Pirate Galleon. The restaurant's original outdoor seating area had earlier been converted into the Pirates Beach playground. 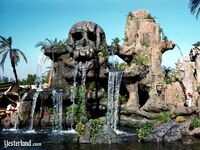 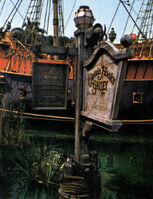 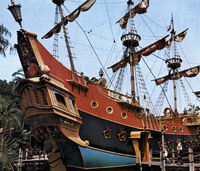 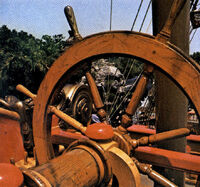 Retrieved from "https://disney.fandom.com/wiki/Captain_Hook%27s_Galley?oldid=4050654"
Community content is available under CC-BY-SA unless otherwise noted.