The Jolly Roger
Captain Hook's hooks are objects owned by Captain Hook in Peter Pan and the spin-off television series Jake and the Never Land Pirates.

In the original film, the hooks are briefly seen after Mr. Smee informs Hook that Peter Pan has banished Tinker Bell. This shocking news gives Hook an idea, so he orders Smee to retrieve his case of hooks (which Smee calls his "Sunday set") before he sends him to capture Tinker Bell. He was still seen wearing his golden one, as he uses Tinker Bell's jealousy of Wendy to learn the whereabouts of Hangman's Tree.

The hooks appeared in one of the outtakes in this Disney Fairies film, when Blaze accidentally frightens the scaredy Tinker Bell when he fetches one.

The hooks play a larger role in the Disney Junior spin-off no longer just limited to a mere case, but an entire cabinet of various ones at Captain Hook's disposal to help him collect as much treasure as possible and even plunder treasure from Jake and his crew. Some of them include a Whirly-Hook to give him flight, a plunger one to grasp treasure, and even a butterfly net one.

In the episode "Captain Hook's Hooks" Captain Hook notices that the hooks are filthy. He orders Sharky and Bones to clean them but while they were doing so, the Octopus creeps aboard the Jolly Roger and steals eight of them from Sharky and Bones before fleeing back into the Never Sea. Knowing they'll have to walk the plank if Captain Hook finds out Sharky and Bones to pursue the sneaky cephalopod to Neverland with the help of Jake and his crew to retrieve the eight stolen hooks. They are retrieved and resorted. However, in the mix of getting them back, they are even more filthy.

In the episode "Hook's Hookity-Hook!" Captain Hook get fed up with switching between his hooks so he invents an all in one Swiss army one called the "Hookity-Hook" so he'll always have every one in his collection on hand. But it becomes too hard for him to control, forcing him to revert to many individual ones once more.

When Beatrice Le Beak and her pet falcon, Fast Claw, are held captive by Captain Hook and his crew and forced to walk the plank at the end of the episode "Jake and Sneaky Le Beak!", they evade capture and a watery fate with Captain Hook's Whirly-Hook.

In the episode "Pirate Pals!" Beatrice is captured yet again by the combined forces of Captain Hook and his crew. He plans on leaving her stranded on a deserted island, but before he could put his plan into motion she makes her escape yet again from his Whirly-Hook.

The Hook of Killian Jones is a replacement of his left hand when Rumplestiltskin chops it off. His notoriety of having a hooked hand earns him the nickname "Hook." He finds a way to travel to Storybrooke and get revenge on Rumplestiltskin, now known as Mr. Gold. After Hhe is being hospitalized for severely fractured ribs, his hook is taken away and kept in the sheriff's office, but he eventually steals it back. Using a type of poison, he coats it, tracks down Mr. Gold in New York, and stabs him. When Killian blackmailed Mr. Gold into reattaching his lost hand, Emma jokingly asked if she was supposed to call him "Captain Hand". However, the hand belonged to his old self, and was causing him to relapse back into that person; in exchange for a favor to Mr. Gold, he had his hook once more take the place of his hand.

Emma once pointed out that Killian looks for any opportunity to use his hook. If he needs to appear harmless in the Land Without Magic, he swaps it for a prosthetic hand.

A severed one of hook's main hooks appeared in this restaurant where it was mounted on the wall to serve as a lantern.

One of the pieces of luggage passing by G2-9T in the Star Tours space-port contains assorted 18th-century pirate paraphernalia including one of hook's hooks.

In this store is a chamber with mounted sculptures depicting the arms of Disney Villains. The arm depicting Captain Hook has his hook holding a lantern imprisoning Tinker Bell.

Hook's hook in Once Upon a Time 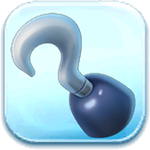