"LLOYD!"
Captain Nora Lee Andromeds Nebulon is a character from Lloyd in Space. She is the commander of Intrepidville, and mother of Lloyd and Francine.

Not much is known about Nora's past, though she used to dress like a "cool girl" back in high school. Sometime before the start of the series, Nora met her husband Mr. Nebulon and the two got married and had their first child Lloyd in the year X14. At some point, she also met Brock Rockman. When Lloyd was only six, her family moved to Intrepidville where she (or her husband possibly) became the commander of Intrepidville. Eight years later after Lloyd was born, Nora gave birth to a second child, Francine. Sometime after Francine was born Mr. Nebulon passed away (it is evident he passed away rather than left due to hints given by several characters). How this affected Nora is unknown but it may have made her the tough, no-nonsense mother she is today.

Nora is a stern, tough commander who is brave, fearless, and will always put Intrepidvilles safety as well as her family's safety before her own. She is also able to maintain a calm, level head even during the most stressful situations. She is more than willing to help her baby, Lloyd from danger and haywire. Before the death of her husband, Nora was apparently more relaxed and somewhat "wacky". Due to the effect of her husband's passing, it can be assumed the two loved each other dearly. Nora can be warm and cheerful on occasions, such as the annual Nebulon family weekend vacations. At the start of the series she was also a sucker for Francine's "cutesy and innocent" acts, unaware that she was manipulative towards Lloyd behind her back. Throughout the course of the series Nora began to wise up to Francine's true cunning nature. She also appears to be attractive as many men seem to be attracted to her. 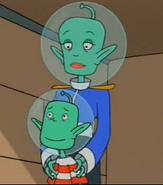 Nora with Francine Nebulon
Add a photo to this gallery

Retrieved from "https://disney.fandom.com/wiki/Captain_Nora_Nebulon?oldid=4067791"
Community content is available under CC-BY-SA unless otherwise noted.