This article is about the Gargoyles character. For the Tangled characters, see Captain of the Guards.

Captain of the Guard

Falls off the cliff with Hakon and into his death

“"It's your choice then, the catapult or me"”
―him giving two guards who wanted to abandon their posts during an attack a choice, they quickly returned to their posts.

The Captain of the Guard is a character from Disney's Gargoyles. He was the commander of the guards of Castle Wyvern from at least 984 AD until his death in 994 AD. He was a brave warrior and a former ally of Wyvern's gargoyle clan. Because of his friendship with them and lack of physical beauty, his men often mockingly referred to him as "Captain of the Gargoyles". He is voiced by Ed Gilbert.

The Captain eventually made a deal in 994 AD to sabotage the castle guards' defense efforts, allowing the Viking Hakon to pillage the castle. He did this out of scorn for the gargoyle-hating members of Wyvern's human population, and to protect the gargoyles by leaving the castle to only him. However, the plan backfired when Goliath's mate, his co-conspirator, failed to send the rest of the Clan away with him, and Hakon, not willing to take any risks, destroyed them all as they slept. The Captain was horrified by this, yet still remained with the Vikings.

Unfortunately for him, six survivors of the Wyvern Clan tracked Hakon's men down and attacked them. The Captain, along with Hakon, was faced by Goliath, at the edge of a cliff. Goliath believed that Hakon was responsible for the death of his mate, and wanted vengeance. Terrified, Hakon tried to incriminate the Captain for his crime, which caused the Captain to grapple with him. They fell from the cliff to their deaths.

Their bodies were dead; however, their spirits remained. Their souls were bound to the earth plane by the magical power of a monolith in a cavern nearby that had served as the lair of the Archmage in 984 AD. The Captain and Hakon hated one another but decided they hated Goliath more for causing their deaths. This, along with the Captain's guilt over what his actions had caused, was what held his spirit there. The two waited 1001 years for Goliath to return, gaining mystical power from the monolith.

In 1995, Goliath returned, arriving there on the first stop of the Avalon journey. Along with him were Elisa Maza, Angela, and Bronx. The Captain and Hakon used their power to create illusions to torture Goliath and lure him to the monolith proper, where their power was the greatest. There, they first created animated stone statues resembling the slain members of the Wyvern clan to attack and torture Goliath with, but they were found out when they mistakenly created a statue of Demona, who had, unknown to them, survived the massacre.

The Captain and Hakon then used the power of the monolith to drain Goliath's life force to replenish their own, making him into a ghost while they became flesh and blood once more. As he began losing physical substance, Goliath asked his old friend what is life without honor. Realizing that he was letting his past mistakes repeat themselves, the Captain had a change of heart, and attacked Hakon, disrupting the draining process, returning Goliath to normal, and destroying the monolith. The Captain, finally having atoned for his crimes, was now free of the "shackles of guilt and hatred" that had held him to the earthly plane all along. He passed on to the afterlife, his spirit finally at peace. 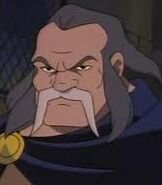 The Captain with Princess Katharine and Hakon.
Add a photo to this gallery

Retrieved from "https://disney.fandom.com/wiki/Captain_of_the_Guard_(Gargoyles)?oldid=4174756"
Community content is available under CC-BY-SA unless otherwise noted.