Carasynthia Dune, also known as Cara Dune, is the tritagonist of the 2019 Disney+ series The Mandalorian. Born from the planet of Alderaan, Cara joined the Rebel Alliance and became a shocktrooper, following the destruction of her planet by the Galactic Empire. After the defeat of the Empire, Cara became a mercenary following the creation of the New Republic where she encountered the Mandalorian bounty hunter, Din Djarin and allied with him in protecting a Force-sensitive infant named Grogu, who is of the same species of Yoda, from the remains of the Galactic Empire.

Carasynthia Dune was from Alderaan, but was apparently not on her home planet when the Death Star destroyed it in 0 BBY. Dune then joined the Rebel Alliance. Dune had a small Alliance Starbird tattoo under her left eye, and Dune saw most of the action just after the Battle of Endor cleaning up local Imperial warlords. After the Galactic Civil War ended, Dune struggled to find a new place in the changing universe. Her new missions mainly consisted of preserving peace as a means of maintaining order. After leaving the New Republic, she was involved in a number of events that left her hiding where she took up residence on the planet of Sorgan, becoming a mercenary.

Cara Dune was on the remote planet Sorgan where she met The Mandalorian and The Child. Although Dune first thought that the Mandalorian wanted to score a bounty by catching her and he was also watching her, the two realized after a hefty duel that they could become better allies. The Mandalorian invited Dune to protect a village of Krill farmers.

The Mandalorian thought of leaving the child with Omera and the villagers, but a Kubaz bounty hunter decided otherwise. He had the child in his sights, but Cara had stalked him and shot him from behind. The ways of Dune and the Mandalorian separated, but they both realized they had a new ally.

After receiving a proposal from Greef Karga to put things in order at Nevarro, the Mandalorian again went to Sorgan to recruit Cara Dune for his mission. Dune agreed when the Mando said they were ex-Imperials. Kuili and IG-11 also joined the group. Along the way, Dune and the Mandalorian tested their strength with a game of arm wrestling. The Child saw this as a threat to the Mando, however, and he bit Dune with a Force Choke. The Mandalorian said he shouldn't do that because Dune was a friend and ally.

After the child healed Greef Karga from a deadly poison on Nevarro, known Magistrate color. He shot two of his own bounty hunters and confessed that it was originally planned to kill the Mandalorian and Dune. Kuiil hurried with the baby to the Razor Crest, while Karga, the Mando and Dune planned a plan.

However, that plan ended in disaster. The Client was shot by his client, Moff Gideon. Gideon's troops surrounded the building where the Mandalorian, Dune and Karga were located. Meanwhile, Kuiil had died, but IG-11 had managed to get the baby back. His arrival in the city caused many of Gideon's troops to be eliminated. Dune saved the Mandalorian when he was seriously injured in an explosion. She also day how the baby saved their lives as he fended off and bounced off the flames of an Incinerator Stormtrooper.

Dune went to the sewers where The Tribe once had a refuge. After The Armorer told the Mandalorian that the child could use the Force and from now on he was part of the Mandalorian culture, the group tried to escape via the lava river. IG-11 sacrificed itself to blow up the waiting troopers. Then it was the turn of the Mandalorian to fight Gideon in his Outland TIE Fighter with his jetpack.

Cara Dune decided to stay on Nevarro with Greef Karga. The Mandalorian left with the child hoping to find a new home for the foundling. 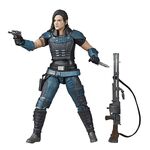 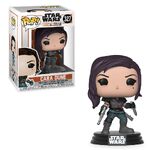 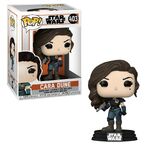 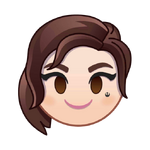