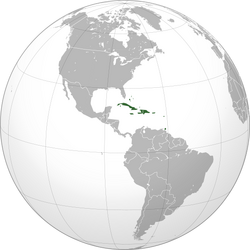 Situated largely on the Caribbean Plate, the region comprises more than 700 islands, islets, reefs, and cays. These islands generally form island arcs that delineate the eastern and northern edges of the Caribbean Sea. The Caribbean islands, consisting of the Greater Antilles on the north and the Lesser Antilles on the south and east (including the Leeward Antilles), are part of the somewhat larger West Indies grouping, which also includes the Lucayan Archipelago (comprising the Bahamas and Turks and Caicos Islands) north of the Greater Antilles and Caribbean Sea. In a wider sense, the mainland countries of Belize and Guyana – historically and culturally part of the British West Indies – may be included.

Retrieved from "https://disney.fandom.com/wiki/Caribbean?oldid=3638992"
Community content is available under CC-BY-SA unless otherwise noted.