Up
Ralph Breaks the Internet (cameo)

Standing on the top of Paradise Falls, just as Carl and Ellie had wished
Carl Fredricksen's House is a primary location and plot point in the 2009 Disney/Pixar animated feature film, Up.

One day while walking home from a movie, young Carl Fredricksen discovers an abandoned house and hears a voice from inside. Curious, Carl enters the house and discovers Ellie, a young and feisty girl with whom he quickly falls in love. As adults, the two get married, then rebuild and refurbish the abandoned house into their new home. They decide to fulfill their childhood dream of going to Paradise Falls and begin saving money for their trip. But over time, they end up using their funds for other things, such as when a tire of their car bursts, Carl breaks his leg, and then when a tree falls and damages their roof. Many years later when Ellie dies, Carl is forced to live alone in the now refurbished house, which is surrounded by a huge construction site in the city. The next day, Carl is about to be picked up by Shady Oaks Retirement Home after striking a construction worker with his cane, when he reveals thousands of balloons that lift him, his house, and a Junior Wilderness Explorer named Russell into the air.

While in the air, Carl's house runs afoul of a terrifying storm, and eventually crash lands near where Carl plans to put his house, Paradise Falls. This forces Carl and Russell to carry the floating house with the garden hose to the falls, which turns out to be a long walk. The house loses many balloons along the way (one portion during the escape from Muntz and another portion due to the elderly explorer's risky offer which involves burning the house). By the time Carl and Russell reached the falls, the house is unable to float completely.

The next day, after seeing Russell float away to Muntz's blimp, the Spirit of Adventure to rescue Kevin, Carl gets an idea of emptying the house completely of furniture and everything to lift off again as he lost lots of balloons. Unknown to him, Dug went with him in the rescue mission. Upon reaching the blimp, Carl hoists the house to it with the garden hose as he rescues Russell. Russell, still tied to the chair, is then left alone in the house as Carl and Dug enter the blimp to rescue Kevin.

Russell's efforts to free himself causes the hoisting to be undone, causing the house to float away. As Russell holds for dear life on the garden hose, the house is now under dart strikes by the dog biplane squad as it has caught the attention of Muntz from the bridge. Russell regains control of the house after successfully climbing to the porch and distracting the dog pilots by tricking them into believing that squirrels existed, which crashes their planes.

As Carl, Russell, Kevin, and Dug attempt to escape, however, it is short lived. Muntz shoots down half of the remaining balloons, causing the house to fall. Carl, knocked out from the house, struggles to hold the house temporarily due to the garden hose's incapability to withstand the weight. As Muntz enters the house, Russell, Dug, and Kevin managed to escape swiftly due to Carl's exploitation of the bird's fondness of chocolate. The garden hose breaks from it, causing it to finally descend as Muntz falls to his death after snagging a few balloons on his leg. Carl and his allies jack the ship, and the house floats away as they watch in disappointment.

Unknown to them, in the end, the house lands exactly on Paradise Falls, just as Ellie envisioned it to be.

The house appears in the season 7 episode "Beauty", built by Gold and Belle, who take the place of Carl and Ellie Fredricksen.

The house as a clubhouse for Ellie.

The house during Carl and Ellie's married years.

The house in the city after Ellie's death and the neighborhood torn down.

"So long boys! I'll send you a postcard from Paradise Falls!"

The house in full flight and altitude.

The house during the violent storm.

"What?! That's it?! I came all this way just to get stuck on the wrong edge of this rockpile?!"

The house as being carried by Carl and Russell.

The house in Muntz's brief custody.

The house losing its first portion of balloons.

Muntz setting the house on fire.

The house losing its second portion of balloons during Muntz's risky offer.

The house unable to float completely after reaching Paradise Falls.

The house after being emptied of furniture and everything else from inside.

The house being docked to the blimp's sidewalk.

The house floating away from the Spirit of Adventure.

The house being underattacked by Beta and Gamma's biplane squad.

Muntz shoots down half of the remaining balloons, leaving the house with no positive lift.

The house falls with Dug, Russell, and Kevin inside.

The house descending from sight.

The house finally resting on Paradise Falls just as Ellie had envisioned it.

Visual development of the baby's bedroom by Daniel Arriaga.

The house in Kinect Rush: A Disney/Pixar Adventure

The house in Disney Infinity

The house in Once Upon a Time

A cameo of the house in LEGO The Incredibles 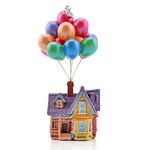