2 (with Castle)
Carl Weathers is an American actor, television director and former professional football player who is best known for portraying Apollo Creed in the Rocky film series, Al Dillon in Predator, Chubbs Peterson in Happy Gilmore and Little Nicky, and an exaggeratedly frugal fictionalized version of himself on the Fox sitcom Arrested Development. He also voiced Kirby in Balto III: Wings of Change and the God of Basketball in the Cartoon Network series Regular Show.

For Disney, Weathers voiced Combat Carl and Combat Carl Jr. in Toy Story of Terror! and Toy Story 4, as well as Omnitraxus Prime in Star vs. the Forces of Evil. He also plays Greef Karga in the Star Wars live-action series, The Mandalorian.[1] 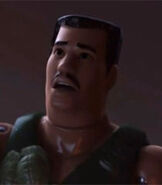 Omnitraxus Prime
(Star vs. the Forces of Evil)

Carl Weathers speaks at the Brothers panel at the 2009 Summer TCA Tour.

Carl Weathers at the premiere of The Mandalorian in November 2019.