Carlos Jaime Alazraqui (pronounced "Allaz-rah-kee") is an American stand-up comedian, actor, voice actor, impressionist, producer, and screenwriter, who is best known for voicing the Taco Bell Chihuahua in the Taco Bell commercials, the titular character Rocko and Spunky in Rocko's Modern Life, Denzel Crocker and Juandissimo Magnifico in The Fairly Oddparents, Lazlo and Clam in Camp Lazlo, Salty Mike in Squirrel Boy, Lube and Winslow in CatDog, Walden in Wow! Wow! Wubbzy!, Rikochet in¡Mucha Lucha!, Monroe in The Life and Times of Juniper Lee, Nestor in Happy Feet and its 2011 sequel, Granpapi Rivera in El Tigre: The Adventures of Manny Rivera, and Mr. Weed in Family Guy. He is also known for being the original voice of the titular character in the Spyro video game franchise. In addition, he lends his voice to Carlos Casagrande and Sergio in The Loud House and its spin-off series The Casagrandes.

Alazraqui had multiple Disney roles, most notably being the current voice of Panchito Pistoles, as well as voicing El Chupacabra in Planes.

Additionally, he has voiced Mike Wazowski from the Monsters, Inc. franchise whenever Billy Crystal is unavailable, as well as Francesco Bernoulli in Kinect Rush: A Disney/Pixar Adventure and the Disney Infinity series. He also lent his voice to Giovanni in Cars: Mater-National Championship. Various other roles are all listed below.

Bill Andersen's Fear
(Inside Out and Riley's First Date?)

Brazilian Helicopter Pilot
(Inside Out) 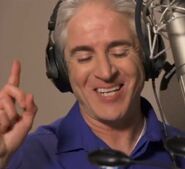 Carlos Alazraqui behind the scenes of Planes.

Carlos Alazraqui with his daughter, Rylee at the premiere of Planes in August 2013. 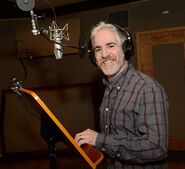 Carlos Alazraqui behind the scenes of Elena of Avalor.
Community content is available under CC-BY-SA unless otherwise noted.
Advertisement