Carmen Got Expelled was a television series pitched to Disney Television Animation by El Tigre creator Jorge R. Gutierrez in 2010, that only remained as a pilot episode consisting of a fully-animated intro sequence and a color animatic. The pilot was posted onto Vimeo by Gutierrez the same year.

The series was to revolve around Carmen, a rebellious young girl who has been expelled by every school she takes part in until she meets the Baron, owner of a private academy he enrolls her into, and now must do whatever it takes to avoid being expelled again. 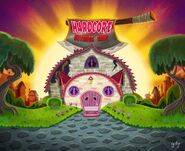 Retrieved from "https://disney.fandom.com/wiki/Carmen_Got_Expelled?oldid=3813054"
Community content is available under CC-BY-SA unless otherwise noted.