Ultimate Spider-Man
Guardians of the Galaxy

Has all of Spider-Man's abilities
Shapeshifting
Carnage is a vicious, powerful symbiote created through enhancing samples of the original Venom symbiote, originating from Marvel Comics. Ultimate Spider-Man introduced two versions of Carnage, the first version being a symbiote-infected Peter Parker mixed with his spider-powers, created by the Green Goblin. The second was created by Michael Morbius as a completely separate creature. The second Carnage is far more evolved and powerful, being capable of taking a humanoid form without a host, and being intelligent enough to speak.

“Look at the absolute 'Carnage' you have wrought!”
―The Goblin amazed by Carnage's ballistic personality

Like its predecessor Venom, the Carnage symbiote offers its host all the abilities of Spider-Man as well as shapeshifting its forms, which it used to create spikes or sprout whip-like tendrils to lash at opponents. But the host is incapable of controlling the symbiote's actions, as the symbiote itself is parasitic in nature and will not oblige for the host's behalf. Unlike Venom, who has some conscience, Carnage is purely chaotic, acting upon instinct and completely destructive as it is volatile.

Carnage bears a resemblance to its archetypes Spider-Man and Venom; it has big white eyes, a tongue, and sharp claws and teeth similar to the Venom symbiote except it is smaller than Venom's hulking form and is red like Spider-Man, albeit darker, with black lines across its body. Black tendrils protrude from its backside.

Carnage takes on the powers and abilities of its host organism. The symbiote grants the following powers:

As the S.H.I.E.L.D. Helicarrier was sinking, Green Goblin sampled Venom and left Harry Osborn and Spider-Man to die. With the Venom sample in hand, he sought to find the perfect host for it after his son Harry's failure of partaking the role. He chooses Peter Parker and captures him, injecting the enhanced Venom symbiote into Peter and due to his powers and intelligence, he was transformed into an entity the Goblin named Carnage. Immediately breaking out of his chains, the Goblin then sent him to destroy the team and Spider-Man, unaware that Peter himself was Spider-Man. Ambushing the S.H.I.E.L.D. team investigating at Harry's house, Carnage fought and defeated White Tiger, Power Man, Iron Fist, and Nova. However, there was still part of the Venom symbiote inside the Carnage symbiote which had a deep bond with Harry, allowing Harry to get Carnage to remove itself from Peter and take him instead, but it instead turned him back into Venom. Afterwards Norman takes it back to find the perfect host and a small piece is left behind, which is recovered by S.H.I.E.L.D.

Carnage is eventually recreated by HYDRA scientist Michael Morbius with extract from the Venom symbiote under the orders of Crossbones. After Doctor Octopus double crosses Morbius by injecting him with a serum with vampire bat DNA in it by Doctor Octopus, Michael Morbius retaliates by throwing the Carnage symbiote on him, turning him into the symbiote's first host. Spider-Man and Flash Thompson are able to use a sound device to remove the creature from Doctor Octopus (neutralizing the nanites that changed Doctor Octopus' appearance in the process), only for the symbiote to reform moments later. It then announces its plans for chaos as it battles the pair, and eventually tricks them into exploding it so that the civilians below can become infected by the fragments of the Carnage symbiote.

With the Carnage-infected citizens running amok in Manhatten, Spider-Man along with the remaining heroes are forced to fight the infected, including an infected Hulk, J. Jonah Jameson, and Shriek. When several infected civilians corner Mary Jane Watson and a comatose Harry at Oscorp, Harry's Anti-Venom symbiote is reawakened and fights off the Carnages while demonstrating a cleansing ability against the Carnage symbiote. While Mary Jane uses Daily Bugle Communications' network at Midtiwn High to help innocent civilians, Spider-Man and Anti-Venom travel to the "heart" of Carnage where Harry sacrifices the Anti-Venom symbiote to remove Carnage's control.

However, the Carnage fragments soon converge into a giant creature that Spider-Man and Agent Venom fight, causing the creature to envelop Midtown High and turn it into a hive-like form. To rescue Mary Jane, Spider-Man, Agent Venom, Harry (donning his Patrioteer armor) enter the corrupted school and fighting several variations of Carnage. The group finds Mary Jane, but discover that Carnage has also turned her into its primary host, the Carnage Queen. Under the control of Morbius and Crossbones, the Queen is used to lace deactivated HYDRA missiles confiscated by S.H.I.E.L.D. below Midtown High with Carnage fragments and launch them to every city in the world. Upon Spider-Man breaking the device controlling her, the Carnage Queen fends off Crossbones and Morbius (although Crossbones escapes), however Mary Jane remains under Carnage's control. When the heroic trio reveal to her their true identities and encourage her to fight the symbiote, Mary Jane overcomes the Carnage Queen's control as Flash deactivates the Carnage-laced missiles. However, some residue of Carnage still remains within Mary Jane, which Mary Jane gains control over thanks to experiments by Dr. Connors to become the superhero Spider-Woman.

Thanos as Carnage
Add a photo to this gallery 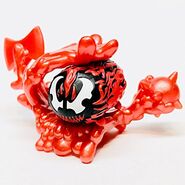 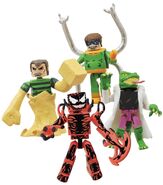 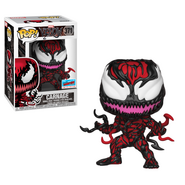 Retrieved from "https://disney.fandom.com/wiki/Carnage?oldid=3962843"
Community content is available under CC-BY-SA unless otherwise noted.