After Minnie's feathery Carnaval costume catches flight, Mickey must race through Brazil to rescue her.

It is Carnaval day in Brazil. Mickey sees a carnival parade passing by, but gets pushed out of the way. Mickey pushes through the crowd until he sees Minnie wearing a feathery Carnaval costume and doing the samba dance. Suddenly Minnie's costume flies away, but she doesn't notice. Mickey tries to catch her while Pete is sleeping at the beach. Pete punches him out, and Mickey falls into the water. Mickey tries again, and warns Minnie that her costume is flying. He tries to catch her but fails. He does the samba again and everyone else joins in. Minnie goes flying and catches Mickey. Minnie kisses Mickey, telling him that he's the best and she winks her left eye as the episode ends. 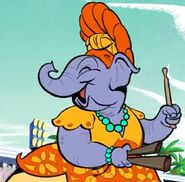 The Elephants Cameo
Add a photo to this gallery

Retrieved from "https://disney.fandom.com/wiki/Carnaval?oldid=4333462"
Community content is available under CC-BY-SA unless otherwise noted.