"Carnival Time" is an episode of Walt Disney's Wonderful World of Color. It aired on March 4, 1962.

Walt Disney invites the viewer to sit down and watch The Von Drake Report, hosted by Prof. Ludwig Von Drake. On the show, Von Drake reports on two annual festival celebrations, Mardi Gras in New Orleans and Carnivale in Rio de Janeiro, where he has stationed Donald Duck and José Carioca respectively as correspondents. 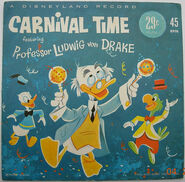 Cover to the record album

Retrieved from "https://disney.fandom.com/wiki/Carnival_Time?oldid=3342229"
Community content is available under CC-BY-SA unless otherwise noted.