Ava Economopoulos
Caroline Gilchrist Rhea is a Canadian stand-up comedian, actress, and model, who is perhaps best known for playing Aunt Hilda Spellman in the ABC/WB Network fantasy sitcom, Sabrina, the Teenage Witch from 1996 to 2003, and for being the original host of the NBC reality television show, The Biggest Loser since 2004, until she was replaced by Alison Sweeney after the end of the third season in 2006.

Her Disney roles include Linda Flynn-Fletcher and Grandma Betty Jo in Phineas and Ferb, Ilsa Schicklgrubermeiger-Von Helsing der Keppelugerhofer in The Suite Life of Zack & Cody, Lynette Hansen in Mom's Got a Date with a Vampire, Judy in Sydney to the Max, and Mrs. Konquist in the Fillmore! episode "Nappers Never Sleep". 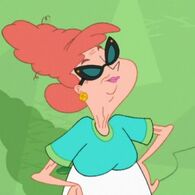 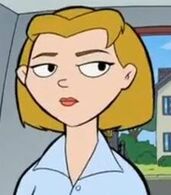 Judy Reynolds
(Sydney to the Max)