Owen, Kaden, Frances
Carrie-Anne Moss is a Canadian actress. She is well known for playing Trinity in the Matrix films.

For Disney, she played Dectective Olivia Neal in the 2000 Touchstone Pictures film, The Crew and Caroline Clairmont in the Miramax Films picture Chocolate, released the same year.

Carrie-Anne Moss at the series premiere of Jessica Jones in November 2015. 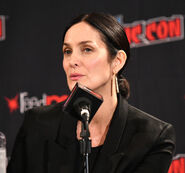 Carrie-Anne Moss speaks at the 2019 New York Comic Con.
Add a photo to this gallery
Retrieved from "https://disney.fandom.com/wiki/Carrie-Anne_Moss?oldid=3827780"
Community content is available under CC-BY-SA unless otherwise noted.