Cardiac arrest due to sleep apnea and atherosclerosis

Carrie Frances Fisher was an American actress, writer, and humorist, who was best known for her portrayal of Princess/General Leia Organa in the original Star Wars trilogy, a role she reprised in the Star Wars sequel trilogy. She was also the daughter of actress Debbie Reynolds and singer Eddie Fisher and the half-sister of actress Joely Fisher. She even played Franny Jessup, another Disney character, in Sunday Drive.

Archive footage of her saying the word "Hope", and a CGI likeness of her image (plastered over Ingvild Deila's) were used to portray Leia's voice and face in Rogue One.

As a screenwriter, she made uncredited rewrites for the Touchstone Pictures film Sister Act. She also wrote The Young Indiana Jones Chronicles episode "Paris, October 1916" (later edited into The Adventures of Young Indiana Jones: (Chapter 9) "Demons of Deception"). Other script editing work included Hook, Lethal Weapon 3, and The Wedding Singer. In addition, she made several edits to her lines in the Star Wars films, as well as edited scripts for the prequel trilogy.[1]

She had already filmed all her scenes as Leia for Star Wars: The Last Jedi before her death. Her mother, Debbie Reynolds, passed away the day after she died. The Last Jedi is dedicated to her memory and she is refered to as ""Our Princess" Carrie Fisher". In Star Wars: The Rise of Skywalker, deleted footage of her from Star Wars: The Force Awakens was used and her daughter, Billie Lourd, played her in a flashback.[2]

Carrie Fisher with her daughter, Billie Lourd, at the set of Star Wars: The Force Awakens. 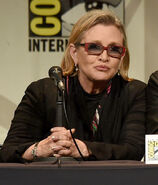 Carrie Fisher and Rian Johnson at the set of Star Wars: The Last Jedi.

Carrie and Daisy Ridley at the set of The Last Jedi.

Carrie and Billie on a promotional picture for The Last Jedi.