This article is about the Mickey Mouse episode. You may be looking for Minnie's song sung in the episode, the Henry Hugglemonster episode, or the song "Carried Away With Books."

"Carried Away" is the ninety-sixth episode and the series finale of Mickey Mouse. It premiered on July 20, 2019.

As Minnie performs a song she wrote for Mickey, "Carried Away", he literally must protect them from that happening to their canoe in a runaway.

Mickey and Minnie are on a date heading down a canal in a rowboat, where Minnie then reveals that she's wrote a song for Mickey as a gift. When she offers to sing it for him, Mickey excitedly declares that he "wouldn't miss it for the world", and promises that he won't let anything distract her while she's singing.

Minnie then obliges, beginning the song when playing her ukulele. However, unbeknownst to her, the boat is starting to get carried out to sea by the currents. Mickey, not wanting to interrupt Minnie's song, tries to stop the boat by sticking an oar into the water. While it does stop them from getting carried out to sea, Mickey somehow ends up launching them high into space.

The rowboat then comes down in the Amazon. While Minnie continues to sing, Mickey gets bitten by a piranha, and starts to scream out in pain but quickly muffles it. Still not wanting to interrupt Minnie, Mickey decides to duck his head underwater and let out his scream down there, where he notices many more piranhas waiting to attack. As they start to leap at the boat, Mickey grabs an oar and starts swinging it to fend off the piranhas before he gets it tangled in some vines. When released from the vines, he starts spinning so rapidly that he sends the boat flying again.

This time, the rowboat lands in a river heading straight for a sawmill. Still in the boat, Mickey tries to reach for the off-button to stop the conveyor belt before it sends them into the giant buzzsaw. Using the oar, Mickey instead hits a lever that causes a crane to drop a load of logs onto the belt, the force of which sends the boat and the buzzsaw flying. The buzzsaw then ends up splitting the boat in two, which Mickey quickly stops by pushing the two halves together. The rowboat then slides along the Great Wall of China before skipping along the water like a stone in front of various world landmarks, including the Taj Mahal and Hudson Bay.

After landing in Canada, much to Mickey's confusion, the mouse soon realizes that the rowboat is about to go over Niagara Falls. Just as the boat goes over, however, Mickey is able to save the day using some rope and a stray piranha in his shorts to make a grappling hook. Mickey's jerry-rigged latches onto Goofy's nose, and the mouse quickly uses it to pull him and Minnie up the falls and send them flying back to the canal, at which point Minnie concludes her song.

After having finished her song, Minnie asks if Mickey liked the song. Mickey then replies that he loved it. When Minnie asks what his favorite part was, Mickey soon realizes he didn't actually hear the song while he was trying to save them, and so he quickly saves face by declaring he loved the whole song and asks to hear it again.

Minnie obliges, but not before she reveals she was aware of what was going on around her as she reveals an anchor she’s been holding just before dropping it into the canal so Mickey can listen without having to save them again. The two laugh and kiss each other as Minnie strums getting ready to sing again and Mickey get ready officially listen this time. With everything steady and now in place, the mouse couple look at each other in happy as the episode ends. 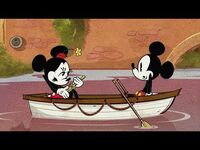