Cars: Road Trip (formerly called Cars: Route 66 Road Trip) is an attraction that opened at Walt Disney Studios Park, Disneyland Paris in June 17, 2021 along with the reopening of the rest of the entire park. The attraction is based on Disney/Pixar's Cars franchise and replaced Studio Tram Tour: Behind the Magic[1]. The ride soft-opened two days earlier on June 15, 2021.

It was originally scheduled to open in Summer 2020, but it was delayed to June 17, 2021, since the opening was postponed indefinitely following the closure of the resort, due to the COVID-19 pandemic. In August 2021, following Disneyland Paris' reopening, Walt Disney Studios Park announced that the attraction was set to become part of Worlds of Pixar.

In the attraction, guests hop on board the tram, and Sally and Cruz Ramirez greet them and guide us through natural and mechanical wonders along the legendary Route 66. At first Cruz is very enthusiastic to see the whole thing, but Sally tells Cruz to relax and go slow. Then Cruz spots the World’s Biggest Lug-Nut with Lightning McQueen in it along with Guido and Luigi. Sally also tells Cruz that there are many attractions to enjoy, such as "The Ghost Garage", "The Copper Canyon Traffic Maze" and "Lonestone Magnet Mine". The tram then approaches the Car-tastrophe Canyon where a Dinoco Tanker Truck can been seen. Suddenly, the Canyon catches on fire and water sprays everywhere (similar to the former scene of the Catastrophe Canyon). Luckily, the tanker truck survives. Afterwards, Sally is reminded that Mater has been making his own art: a statue of him with McQueen and Doc Hudson made out of junk, The Great Whitewall of China and The Statue of Lizzie-ty. The tram passes Mater making a model of the Eiffel Tower, with Filmore very interested in Mater's masterpiece. As the tram arrives at the end of the ride, Cruz and Sally say goodbye to the riders and tell them to see the Route out there. Once the tram stops and the ride ends, guests make their departure. 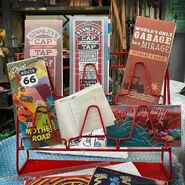