Disney Wiki
Register
Don't have an account?
Sign In
Advertisement
in: Article of the week, Films, Pixar films,
and 9 more
English

View source
watch 02:24
Cars 3 - Official US Trailer
Do you like this video?
Play Sound

“From this moment, everything will change.”
―Tagline

Cars 3 is a 2017 American computer-animated sports-comedy adventure, the third film in the Cars series, and Disney/Pixar's eighteenth animated feature film, which was released in theaters on June 16, 2017.

"Blindsided by a new generation of blazing-fast racers, the legendary Lightning McQueen (voice of Owen Wilson) is suddenly pushed out of the sport he loves. To get back in the game, he will need the help of an eager young race technician with her own plan to win, inspiration from the late Fabulous Hudson Hornet, and a few unexpected turns. Proving that #95 isn't through yet will test the heart of a champion on Piston Cup Racing's biggest stage!"

As the Piston Cup season progresses, Lightning McQueen, now a seven-time Piston Cup racing legend, finds himself overshadowed by Jackson Storm, an arrogant rookie who belongs to a new generation of racers that use the latest technology to improve their performance. Lightning's fellow veterans either retire or are fired by their sponsors, to be replaced by new-generation racers. He falls behind the pack in the final race of the season; while trying to catch up, he loses control and suffers a violent rollover crash. Four months later, while recovering in Radiator Springs after the violent crash, a primer-coated Lightning watches footage of the crash that ended the career of his late mentor, Doc Hudson. He tells his girlfriend, Sally Carrera, that he does not want to be forced into retirement as Doc was and decides to start training again, looking for new ways to regain his edge. Rusty and Dusty, the owners of Lightning's Rust-eze racing team, send him to a newly opened racing center, much to his surprise. When he arrives, he learns that they have sold Rust-eze to new owner Sterling, who assigns him to work with trainer Cruz Ramirez. Lightning eventually becomes impatient and annoyed with Cruz's methods and attempts to use a high-tech racing simulator, only to cause severe damage to the equipment.

Convinced that Lightning is no longer capable of winning, Sterling is ready to take him off the racing circuit and use him for product endorsements. Lightning offers a deal instead: if he wins the first race of the new upcoming season in Florida, he can keep racing at his discretion; otherwise, he will retire immediately. Sterling accepts the deal and sends Cruz to work with him one-on-one at a nearby beach.

Instead of improving his own top speed to beat Storm's speed, Lightning spends most of the day helping Cruz get used to racing on the sandy coastline outside the training center. Then, for inspiration, they travel to a dirt track on which Doc raced but inadvertently ended up competing in a demolition derby, which Cruz ultimately wins, leading to Lightning being humiliated on national television. When he lashes out at her for wasting his time and breaks her trophy, she gets angry and reveals that she had wanted to race professionally when she was younger but never started a race because she felt outclassed by the other cars. Finally, she leaves to make the trip back to the racing center on her own.

After seeing a report on Storm's new speed record, Lightning calls his best friend, Mater, for advice. Mater suggests that he track down Doc's mentor Smokey. Lightning picks up Cruz, but she refuses to go with him after what he said to her before. Lightning tries to make it up to her by fixing her trophy and dancing to help her get on Mack. Cruz, getting impatient by Lightning's dancing and singing, agrees, and the two travel to Doc's hometown of Thomasville, where they meet Smokey and several of Doc's old friends. Accepting that he is not the racer he once was, he allows them to coach him in methods to outsmart Storm instead of beating him with sheer speed. Smokey reveals that even though Doc never raced again after his crash, he found new happiness in training Lightning. During a final practice race, Lightning has a flashback to his crash and loses to Cruz, who has been taking some of Smokey's lessons to heart.

Lightning is surprised to find Smokey and Doc's old friends cheering him on, despite him falling behind to the next-generation racers at the race in Florida. Sterling spots Cruz among them several laps into the race and orders her to return to the racing center. Lightning calls her back to the speedway, has his pit crew outfit her for racing, and gives her his number so she can take his place. Using both Smokey's advice and her own, Lightning coaches her through the pack until she is in second place behind Storm. On the last lap, Storm rams Cruz into the wall, but she flips away using one of Doc's old techniques and lands ahead of him to win the race, much to the amazement of McQueen. She and Lightning are both credited with the victory, and she quits her job with Sterling to accept an offer to race for Dinoco.

Later, in Radiator Springs, Lightning and Cruz put on an exhibition race for their friends. They have adopted Doc's old racing colors and number, respectively, to honor his memory. Dinoco has bought Rust-eze from Sterling, and Lightning decides to continue racing and train Cruz as well.

In a post-credits scene, Mater is singing a funny song and is cleaning in his lot, and when his iPad rings, he gets startled and jumps in fright, then inadvertently knocks over his reception antenna along with tires falling down from his shack's roof, and the FaceTime on his iPad goes dead, much to his dismay.

At the Disney stockholder meeting on March 18, 2014, Disney CEO Bob Iger announced that Pixar had begun pre-production on Cars 3.[1][2]

Michael Wallis said on August 17, 2013 that the film would include Route 99 in California,[3] while John Lasseter said during the Tokyo International Film Festival that a Citroën 2CV will appear in the film as a reference to Hayao Miyazaki's movie Lupin the 3rd: The Castle of Cagliostro.[4]

The first concept images were released by USA Today on May 30, 2016. Director Brian Fee also gave some info on the characters and plot.

"Cruz Ramirez is trying to figure out how this old dog can learn some new tricks," says Fee.

"Think of where he'd be in his career now in real time," says Fee. "(McQueen) is not an old man, but he's one of the older cars on the circuit with new rookies coming in. People start to wonder and ask when he might retire."[8]

On June 8, 2016, Lasseter revealed that the film will include a different tone as well as a tribute to the first film's deuteragonist Doc Hudson.[9]

On November 21, the first teaser trailer for the film was released and it showed McQueen about to have a horrific crash, like the one that forced the end of Doc Hudson's career.

On January 5, it was announced that Armie Hammer and Cristela Alonzo would voice Jackson Storm and Cruz Ramirez, respectively.

On January 9, Disney released the first trailer during the College Football Playoffs.

On February 26, another trailer was released during the Daytona 500.

On April 25, a teaser was released saying that a full trailer was set to be released, which it was the following day.[11][12]

On May 7, a Japanese trailer was released, showing new footage.[14]

On May 25, Formula One driver Lewis Hamilton revealed on his social media an exclusive clip featuring his character in the film.[16][17][18]

On June 9, a one-minute trailer was released (eleven years after the first Cars film).[22]

On June 14, a "My Senior Project" clip was released on the Disney UK YouTube channel.[23]

A 12-minute exclusive 4D sneak peek was shown at the "Bugs Life Theater" at Disney's California Adventure starting May 12, 2017 with short clips from the movie and a long demolition derby clip that featured McQueen and Cruz taking on Miss Fritter.

A one-minute "Legacy of 95" featurette was released on the Disney UK YouTube channel on June 22.[24]

Cars 3 was released in theaters on June 16, 2017 in the United States in 3D, and in selected IMAX 3D theaters and was accompanied by the Pixar short film Lou.

To promote the UK release, which was July 14, life-size models of McQueen and Storm were shown at the 2017 Formula 1 British Grand Prix, with Wilson, Fee and Reher attending.[25]

Cars 3 grossed around $172 million in USA and Canada and $310 millions in other territories for a worldwide total of $482 million, against a production budget of $150 million.

Cars 3 received mostly positive reviews, the film received an approval rating of 69% on review aggregator Rotten Tomatoes, based on 228 reviews. With the site's critical consensus reads, "Cars 3 has an unexpectedly poignant story to go with its dazzling animation, suggesting Pixar's most middle-of-the-road franchise may have a surprising amount of tread left."[27]

Owen Gleiberman of Variety magazine gave the film positive review stating, "Cars 3 is a friendly, rollicking movie made with warmth and dash, and to the extent that it taps our primal affection for this series, it more than gets the job done. Yet in many ways it’s the tasteful version of a straight-to-DVD (or streaming) sequel.

There are eight songs in the Motion Picture Soundtrack while the Score Soundtrack is composed by Randy Newman.[28] For the film, there are two soundtracks: one containing songs, and the other consisting of the film's score. Both were released on the same day as the film.[29]

The Disney Wiki has a collection of images and media related to Cars 3. 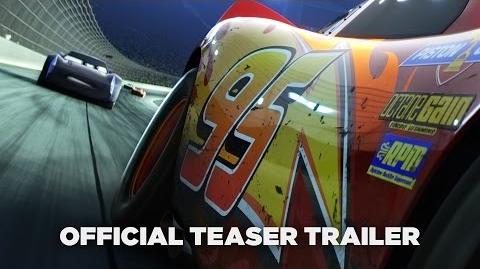 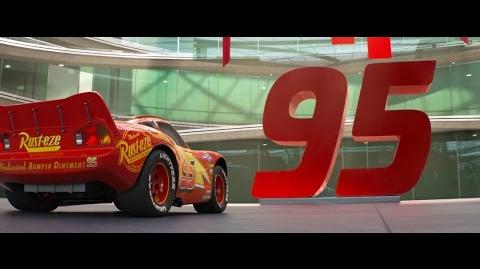 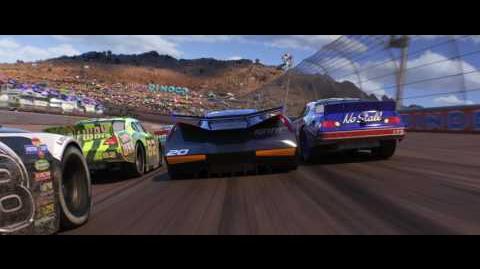 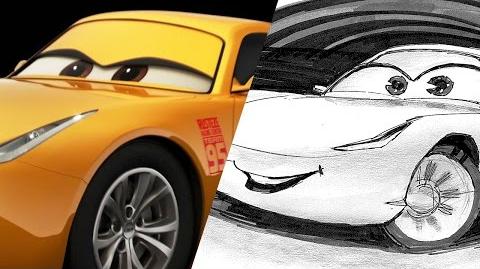 How to Draw Cruz Ramirez from Cars 3 Pixar LIVE 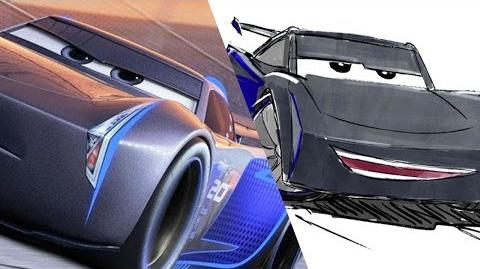 How to Draw Jackson Storm from Cars 3 Pixar LIVE 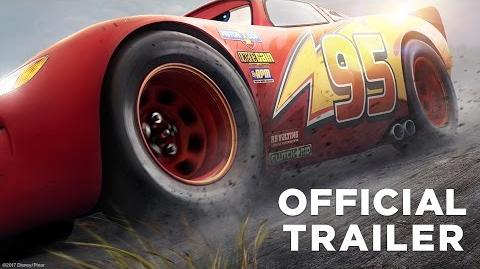 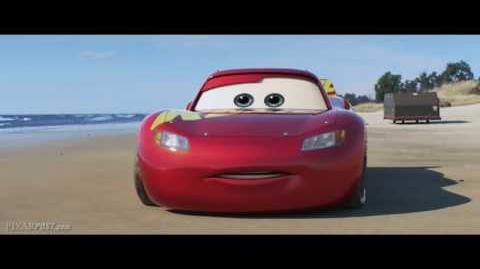 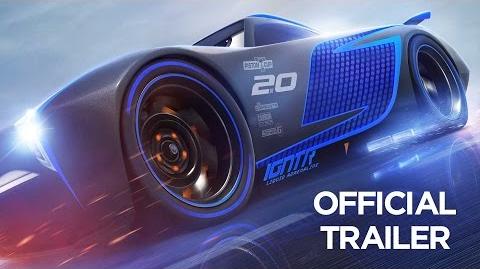 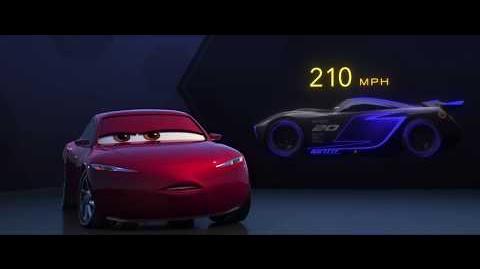 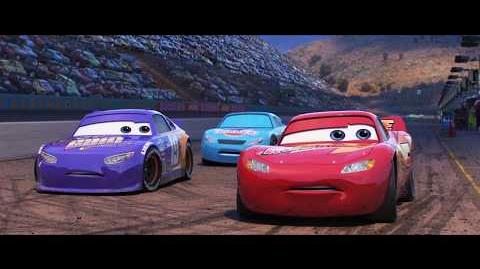 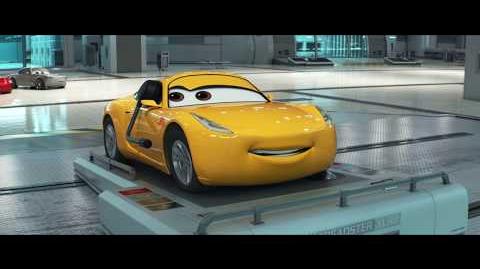 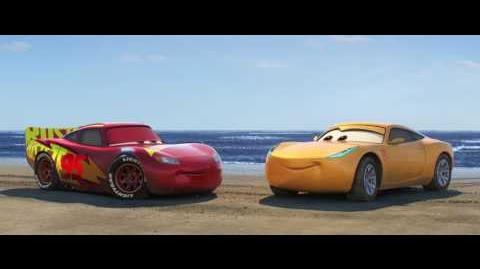 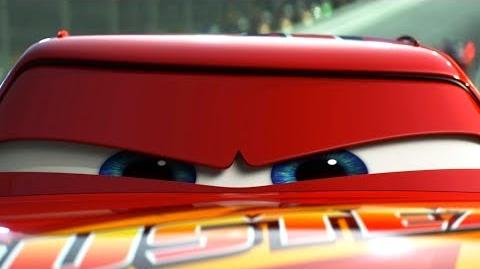 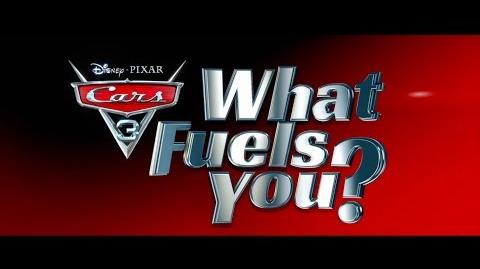 "What Fuels You" with the Cast of Cars 3 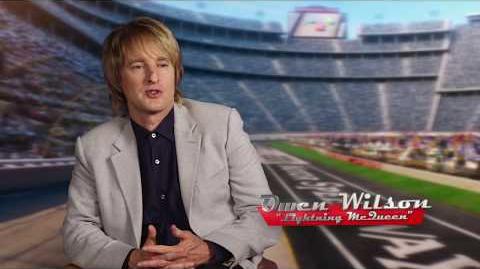 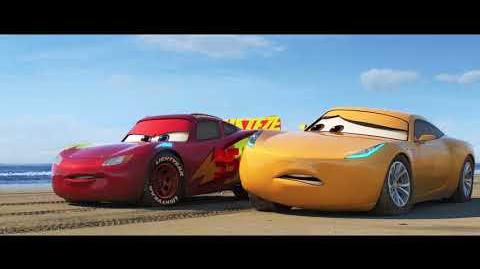 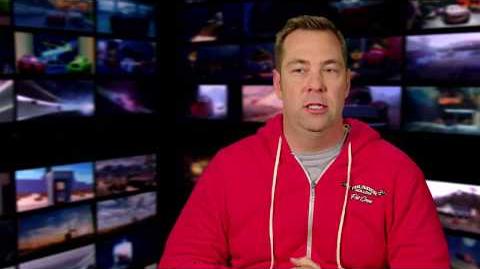 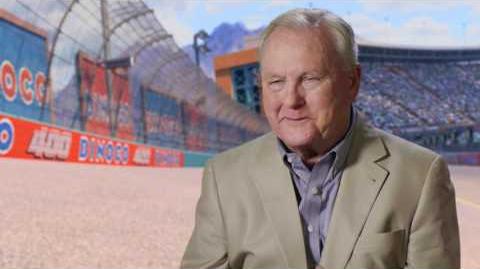 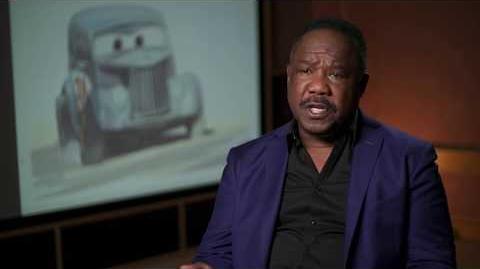 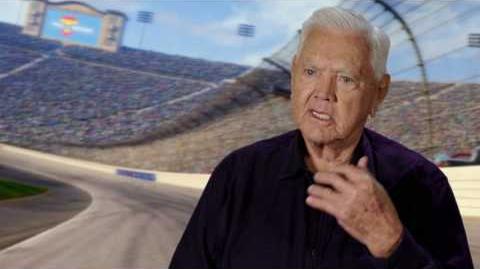 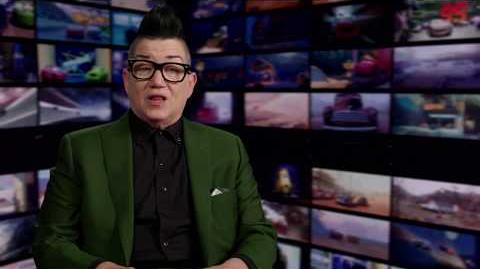 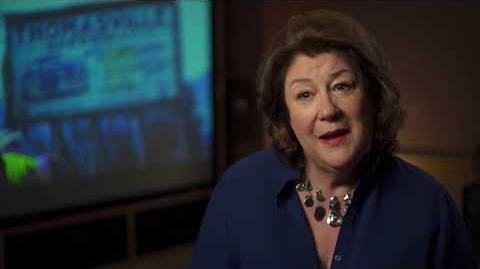 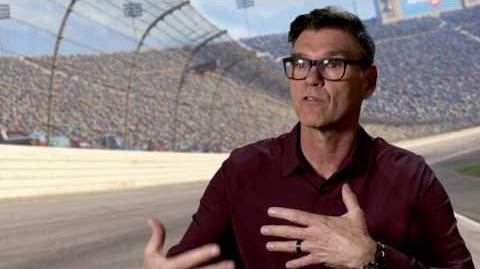 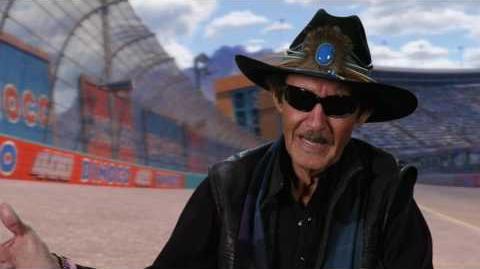 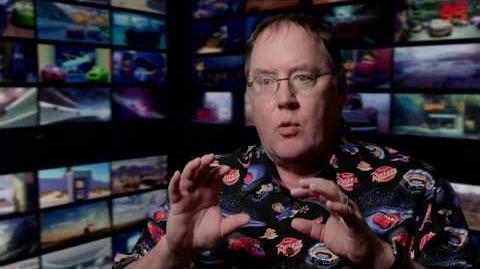 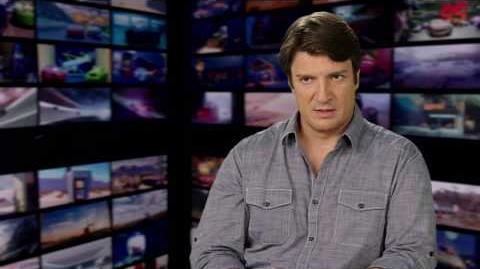 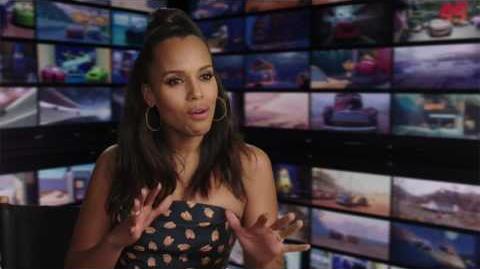 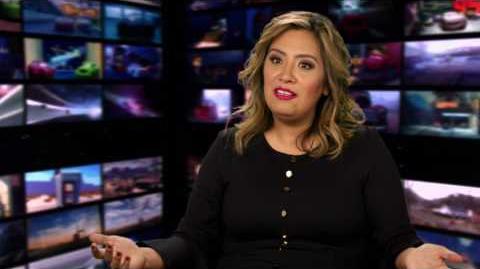 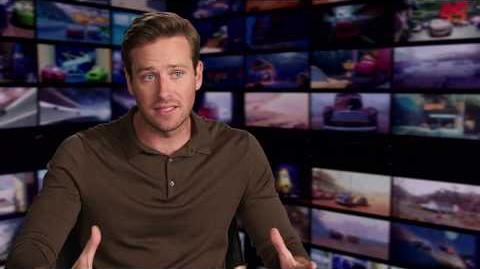 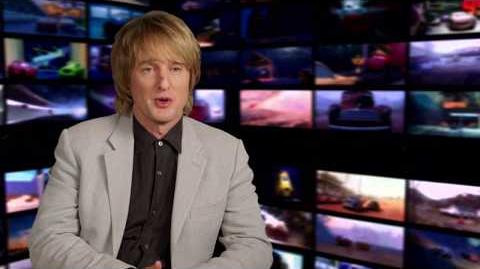