June 15, 2012
Cars Land is a themed area of Disney California Adventure, inspired by the 2006 Disney/Pixar film, Cars. The 12-acre (4.9 ha) area, built as part of Disney California Adventure Park's $1.1 billion expansion project, opened on June 15, 2012. It contains three rides as well as shops and restaurants, all situated in a replica of Radiator Springs, the fictional town in which most of the film's events take place.[1] The area's main attraction is Radiator Springs Racers, a racing ride that uses the technology of Epcot's Test Track.

Most of the present-day site of Cars Land had been used as the "Timon" parking lot since 2001; the lot had been designated as future growth space for Disney California Adventure when it was originally designed in the 1990s, and was partially built over with The Twilight Zone Tower of Terror and the Flik's Fun Fair section of A Bug's Land. A small portion of Cars Land was built over the site of the Bountiful Valley Farm, one of the park's original attractions.

Cars Land was originally conceived by Imagineer Kevin Rafferty as a general celebration of California car culture and Route 66 roadtrip adventures under the name of Carland. Carland would have been set in a small town in the mid-1950s through early 60s, with Cruise Street serving as the main drag through town. Cruise Street was home to Marty's Malt Shop, the Ride n' Shine Car Wash water play area, the Carland Dine-In Theater adapted from the Sci-Fi Dine-In Theater Restaurant, the California Classics Showroom giftshop, and the Be-Bop Garage stage show where car parts were used as musical instruments. The two main attractions were a racing coaster and Road Trip USA, a family ride through roadside attractions and whimsical natural landscapes that included an homage to the Rainbow Caverns,[2] and some concepts included Goofy. When later versions of this concept decided to incorporate the Cars franchise and elements of the Ornament Valley into the racing attraction, it was decided to shift the entire concept around to bringing Radiator Springs to life, as despite being set in Arizona, the film still meshed well with the car culture/Route 66 themes.

Concept art for "Carland" appeared in the "Dreaming" section of the Walt Disney Company's 2006 Annual Report, released on December 12, 2006, 6 months after Cars was released in theaters. The concept art depicted a racing simulator ride but provided no specifics; Disney CEO Bob Iger stated at the time that the concept art depicted projects at various stages of development, and that some of the projects depicted "may never be built".[3]

On October 17, 2007, Disney announced a 5-year, $1.1 billion renovation and expansion plan for Disney California Adventure.[4] The plan included a major overhaul of several existing areas of the park and the addition of Cars Land, an area themed to the 2006 film; Cars Land would be anchored by Radiator Springs Racers, a Cars version of Test Track, a ride at Epcot at the Walt Disney World. Cars Land along with the re-designed entrance plaza, Buena Vista Street, were the last features of the 5-year project to be completed, and opened on June 15, 2012

The layout of Cars Land from the guest's perspective is one of looking down the main street of Radiator Springs, U.S.A., as seen in the original Cars film. There are references to the events of Cars 2 throughout the land, such as a billboard (seen when entering from A Bug's Land) that gives Mater the title of "Sir", and a signed photo of Finn McMissile with Luigi and Guido in Luigi's Casa Della Tires, in addition to souvenirs from their World Grand Prix trip in a display case. References to later projects were incorporated as they were released, with designers considering the land as taking place in an ongoing present, with the exception of the Radiator Springs Racers attraction, which remains in a "Cars 1 1/2" time period to allow for Doc Hudson to play a role in its story.

The main street is Route 66 coming in from the Golden State area, across from the Golden Vine Winery and Walt Disney Imagineering Blue Sky Cellar. The other two entrances into the land are through a path in A Bug's Land between the entrance of Heimlich's Chew Chew Train and Tuck & Roll's Drive 'Em Buggies, and through an archway as a part of the rockwork making up Ornament Valley from Pacific Wharf. The two other entrances are the same path crossing through the middle of Cars Land. The path's name is Cross Street. At the end of Route 66 is the courthouse/firehouse where the street splits. To the left of the split is a backstage access gate. To the right of the split is the entrance to Radiator Springs Racers. In the distance, the Radiator Cap and Ornament Valley Range can be seen. The eastern edge of the Ornament Valley Range includes the Cadillac Mountain Range that consists of Cadillac tail fins that are 125 feet (38 m) high and covers 300,000 square feet (28,000 m2). 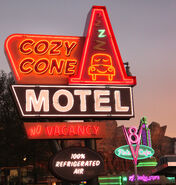 Retrieved from "https://disney.fandom.com/wiki/Cars_Land?oldid=4240253"
Community content is available under CC-BY-SA unless otherwise noted.