Disney Wiki
Register
Don't have an account?
Sign In
Advertisement
in: Pages with reference errors, Locations, Encanto,
and 9 more
English

The Casa Madrigal, otherwise referred to as Casita, is a location from Disney's 2021 animated film, Encanto. It is the Madrigal family's house and home, gifted to the family via a magical candle, and since the building is sentient, it is practically a character in itself.

Personality-wise, the Casita is described to be "little bit more opinionated and flawed like a family. It's a house that plays favorites, a house that messes with people", and its personality "aligns with the feelings of the family Madrigal", such as being happy if the family is happy, or the house's walls beginning to crack if there's discord among them.[1]

Generally, the Casita is kind and very helpful towards the family, using its ability to rearrange its features to suit the family's needs or aid them in their daily routines. The Casita deeply cares about the Madrigals and puts their safety before itself, going as far as getting everyone out when it was falling apart from the loss of the magic, and used the last of its strength to protect Mirabel from harm.

Casa Madrigal is a three-story square building that encloses the ceilingless courtyard at its center. There are many small balconies located on the outer walls and the roof of the house is Spanish roof tiles. Adjacent to the courtyard, there is a single staircase connecting the ground floor with the second floor, which is where Pedro's portrait hangs. After being rebuilt, the front door depicts all of the members of the Madrigal family together carved into the wood.

The ground floor consists of recreational rooms, such as the kitchen and dining room. The second floor is basically one long balcony that overlooks the courtyard and it's where all of the bedrooms are located. Each bedroom door depicts its inhabitant using their respective gift carved into the wood, and they emit a golden glow that illuminates the image. The bedroom doors also have the inhabitant's first initial carved on the doorknob. Relative to the front door, Alma's door is in the center in the back with Pepa's door to its left and Julieta's door to its right. Directly across from Alma's door on the opposite side of the house, above the front door, is the Nursery door, which also functions as Mirabel's personal bedroom. Dolores, Camilo, and Antonio's doors are on the left side, adjacent to their mother, Pepa's door. Isabela and Luisa's doors are on the right side, adjacent to their mother, Julieta's door.

Due to the magical nature of the Casita, the bedrooms are bigger on the inside than they are on the outside, and the nature of the inside of each bedroom corresponds to and acts as extensions of its inhabitant's gift: Isabela's bedroom is a garden in the likeness of a princess's palace bedroom, and Antonio's bedroom is a jungle filled with all kinds of animals for him to converse with. Although that is not always the case, as Alma's bedroom is a replica of her old room from her previous town.[2] Among the bedrooms, there is a nursery where the children under the age of five reside before they get their own room during their birthday/gift ceremony, and the nursery functions as Mirabel's bedroom as well. While it was not shown in the film, the Casita has only one bathroom that the whole family shares.[3]

The third floor consists of Bruno's tower and a room with an open window that displays the magic candle.

Casita is able to freely manipulate itself and all the furniture inside it; it can open and close its own doors, windows, drawers, and cabinets, move and flip the tiles and planks that make up its floors, and it can even decorate itself. Casita also has power in the magical rooms, though that power can be cut off if a gifted family member is emotionally disconnected from the family, as seen with Bruno's door in a flashback, due to the fact that everyone doesn't talk about him, including his family, and that they despise his visions.[4] After being rebuilt, Casita also acts the vessel for the family's magic.[5]

The Casa Madrigal is a magical house created by the magic candle owned by Alma Madrigal and after the death of her husband, Pedro, who was killed by soldiers after they conquered their previous village.

Through the candle, it gives each member of the family a magical gift on their fifth birthday. While it seems Mirabel was the only exception to the rule, as the door to what should have been her special room had disappeared when she turned five, it might be possible that the Casa Madrigal knew what it was doing, as Mirabel showed no hard feelings to what happened and has "conversations" with the house whenever they are working together for something special, and when the house and its magic seemed to be fading—and everyone's gifts with it—Mirabel seems to be the only one who has what it takes to fix it, as she does not need powers to look for the real problem and find a solution.

Later, when the Casa Madrigal begins to lose its magic, more cracks and debris begin appearing, forcing the Madrigals (including Antonio's pet animals) to leave the house in a panic, and as many cracks start appearing in the house, Casa Madrigal eventually collapsed, leaving the Madrigals homeless and without their gifts, as the candle had also melted away due to Mirabel and Alma arguing. The next day, Alma found Mirabel at the river where her husband Pedro died before the Casa Madrigal was created 50 years ago, admitting it was her fault in causing the house to lose its magic for the amount of pressure she put on her family and taking the miracle for granted. After reconciling, Mirabel and the rest of the Madrigal family members (including Bruno) work together in rebuilding the house. Once construction was finished, Mirabel adds the front door's doorknob (which that her family made for her) to the Casa Madrigal, bringing forth new magic (born from Mirabel's love for her family, making her the heart of the family) back to the land of Encanto. With Casita as the new vessel for the magic and regains its sentience, the Madrigal family members rejoice in the return of her home and gifts with enthusiasm.[5]

Casita from a bird-eye view.

The Madrigal personal plates in the ending credits. 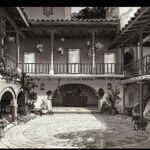 Concept of the courtyard.

The Madrigal Family in front of Casa Madrigal. 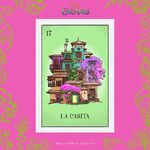