Disney Wiki
Register
Don't have an account?
Sign In
in: Characters, Disney characters, Make Mine Music characters,
and 12 more
English

House of Mouse
A Poem Is...

Pride of Them All

Women, his wife, his daughters, winning

Loss of his game

Not to be confused with Casey Jr. or Casey Jones

Casey is a baseball player and the title character of the Casey at the Bat segment from the animated package film Make Mine Music.

Casey is an arrogant, but nice person. His arrogance is most likely brought about by his baseball prowess, and how he possibly believes star players are supposed to act.

Casey at the Bat

Casey's story is based on an actual poem. It revolves around a baseball team from the town of Mudville and he is a baseball player. The story involves his victory and at one point he prevents people from killing the umpire.

The starts off where the previous short left off -- with Casey having lost the game. His wife (known only as "Mrs. Casey") comes up to him and reveals that she's going to have a baby (specifically their first child). Excited by this, Casey hopes to have a son in order to groom him and carry on his legacy (and redeem his reputation) as a baseball -- through six different pregnancies, Casey and his wife end up having a total of nine children. But much to Casey's shock, all nine of their kids end up being girls.

In the end, the Caseyettes manage to redeem their dad's reputation as a baseball player.

Casey makes several cameo appearances in the series, one of which occurs in the episode "Ask Von Drake" during "The Ludwig Von Drake Song".

Casey's Corner is a baseball-themed restaurant located in Disneyland Paris' Disneyland Park, and in Walt Disney World's Magic Kingdom, which serves primarily hot dogs. Pictures of Casey and the pitcher from the Disney animated adaptation are hanging on the walls, and a life-size statue of a baseball player identified as "Casey" stands just outside. Additionally, the scoreboard shows that Mudville lost to the visitors by two runs, reflecting the outcome of the game in the poem.

There was a game called Casey at the Bat in the Games of the Boardwalk at Disney California Adventure. However, as of 2018, the game was rethemed as "Heimlich's Candy Corn Toss" as part of Paradise Pier being rethemed as Pixar Pier.

Casey looking sternfully at the ball 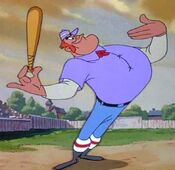 Casey prepares with his bat.

Casey with the Caseyettes from Casey Bats Again

Casey in House of Mouse

Français
Community content is available under CC-BY-SA unless otherwise noted.