Casey Jones
The Little Engine that Could

"Annoying" signals, crashing, being late, switches that lie down on the job

"All aboard! Let's go!"
"I think I can."
Casey Junior is an anthropomorphic, young steam locomotive from the Disney's 1941 animated feature film, Dumbo. His name is a direct reference to Casey Jones, the famous railroad engineer who had lost his life in a train collision in 1900.

Casey is a 2-4-0 American steam tender locomotive with a small, four-wheeled tender full of coal at the back, a big, tall smokestack, a small headlamp in a baseball cap-shaped casing, a tall steam dome with a whistle on top, and a small cowcatcher on his front. Its front has a vague shape of a face, with two headlights in place of eyes and a cylinder-shaped structure protruding forward functioning as its nose. The wheel pistons are often used as "arms", like when Casey has to climb up a difficult mountain.

Casey is a 2-4-0 American steam tender locomotive hauling the WDP Circus train, and he even has his own theme song. He appears frequently throughout the film, and is shown to be somewhat sapient. For example, when the Ringmaster calls, "All aboard! All aboard!", his whistle can be heard calling, "All aboard! Let's go!"

As is the case with most Disney vehicles, Casey has the ability to move more fluidly than real life locomotives, and his boiler is often seen bending and twisting like rubber when in motion.

In addition, Casey can twist and flex his metal body to express motion. He uses his steam cylinders like limbs, giving him the ability to shrug, point and make other gestures.

While the sound of the voice resembles that of one processed through a vocoder, it was actually done with a more primitive device, a Sonovox, which uses one or two small loudspeakers in contact with the throat, which allowed Wright to "speak" by modulating an artificially produced sound with her mouth.

In this live-action/animated tour of the Walt Disney Studio in 1941, a work-in-progress scene of Casey is used to demonstrate the creation of sound effects for animation as well as the vocodor device used to create his voice. This demonstration takes the form of an extended train journey, though it is hard to say whether this was truly a deleted scene from an early version of Dumbo or simply new animation created for the purposes of the demonstration.

In this scene, Casey was, in fact, pulling a passenger train to Cleveland, Ohio. At one point during the excursion, he gets into conflict with a steamboat over the right of way on a drawbridge that spans the river, before overcoming him and causing the drawbridge to close on and push down on the steamboat into the water. Later on, Casey encounters a streamlined train charging towards him and closing in fast, at which he desperately called for a nearby railroad switch lever to wake up and change the track, which it did. He thereafter crashes after an effort to jump the chasm left by a broken bridge in a storm.

In this film, his coupling rods were connected to his foremost driving axle. He also had a roof-mounted bell and was not as stubby. When he was hired for the circus train, he had a few changes: his coupling rods were extended and moved to his rear driving wheels, his bell was removed, and he became stubbier. This implies that he was overhauled after the accident and bought by a railroad based in Florida that served the southeastern United States.

Casey Junior makes a cameo appearance in the Mickey Mouse in the episode Tokyo Go, where he appears at the end of the episode after Mickey departs from the blue bullet train. He also makes another cameo in the episode New Shoes where he is seen controlled by Casey Jones.

A non-anthropomorphic Casey Junior also appeared in the 2019 live-action remake of Dumbo.

Casey Junior appears in the video game as the train which brings the characters to their racing grounds. In the game, Casey is not anthropomorphic, but maintains the same name and appearance it had in Dumbo, albeit without wagons.

A Disneyland attraction named the Casey Jr. Circus Train is based on Casey, with an updated version running at Disneyland Paris. Casey Jr. Splash & Soak Station, a water play area themed around him, was added to the Magic Kingdom in 2012 in the Storybook Circus section of that park's new Fantasyland. He is also the second float in the Main Street Electrical Parade, driven by Goofy and pulling a drum with the parade's name and logo; when the parade returned to Disneyland in 2017, he was made the lead float.

Casey getting ready to travel

Casey having climbed the mountain

Casey Junior at the Station

Casey resting after the long excursion

Casey pulls the train through a rainstorm

Casey in The Reluctant Dragon

Casey's cameo in Spare the Rod

Casey in "Where's My Mickey?" 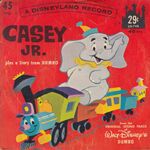 Casey Junior's face in the remake.
Add a photo to this gallery