Kerri, Julie, Mike (with Myers)
Liberty (with Jean Kasem)
Kemal Amen "Casey" Kasem was an American disc jockey, music historian, radio personality, voice actor, and actor, who was best known for his work for Hanna Barbera, where he was voicing Shaggy Rogers in the Scooby-Doo franchise from 1969-1997 and 2002-2009. He was also known for being the host of several music radio countdown programs, most notably American Top 40, from 1970, until his retirement in 2009.

For Disney, he voiced DJ Despicable in the Disney TV series, Teamo Supremo and appeared as himself in the 1996 Touchstone Pictures film, Mr. Wrong. 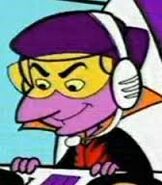 DJ Despicable
(Teamo Supremo)
Add a photo to this gallery

Casey Kasem with pictures of the various characters he voiced in animation.
Add a photo to this gallery
Retrieved from "https://disney.fandom.com/wiki/Casey_Kasem?oldid=4029936"
Community content is available under CC-BY-SA unless otherwise noted.