The Fox and the Hound 2

Leader of the "Singin' Strays"

Cash is the leader of the "Singin' Strays" group, and from the very beginning of the movie it seems to be that he doesn't get along with Dixie very well. They get into an argument and it spirals to the point where he asks Copper to join into the group, causing a gap to form between Copper and his best friend, Tod.

After talking with Dixie, Tod accidentally lets out a secret of Copper's that eventually leads to mass chaos during the fair, eventually leading Copper to get kicked out. Cash's band members feel sorry about it, so they end up splitting apart the band.

In the end, though, Cash's band all comes together, and Tod and Copper make amends. 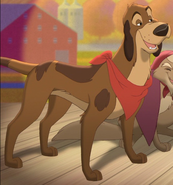 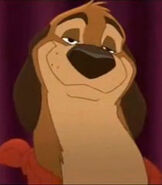 Cash singing with Copper and the Singin' Strays

Retrieved from "https://disney.fandom.com/wiki/Cash?oldid=4433120"
Community content is available under CC-BY-SA unless otherwise noted.