This article is about the character from Hercules: The Animated Series. For other characters, see Cassandra.

“It's not for everybody. On the other hand, living in a deluded fantasy is probably the only way to survive this Underworld on Earth.”
―Cassandra[src]

Cassandra is a major character in the Disney animated series, Hercules. She is a close friend of Hercules' and to a lesser extent Icarus, who is hopelessly in love with her, during their time in Prometheus Academy.

As a result of her constant visions of doom and inability to prevent them from coming to pass, Cassandra is permanently gloomy and deeply anti-social. However, she does find some pleasure in her funny, cunning, sarcastic comments, which are always there when someone makes a mistake. That said, Cassandra is very loyal to her friends, and often acts as a mentor for Hercules in times of need, bringing patience to Icarus's "Icarus-ness." Cassandra's not opposed to lying to get out of doing things that she'd rather not do (like going on dates with Icarus) and has also claimed to have no interest in having children (but, ironically, is shown to be surprisingly good with kids). Also, while Cassandra may not be romantically interested in Icarus, she does care about him as a friend.

Cassandra's parents are Vic (her dad) and Evelyn (her mom), who, in contrast to their daughter, have much perkier and more upbeat personalities (and are also much more chummy with Icarus, much to Cassandra's dismay). But in "Hercules and the Parent's Weekend", it's shown they can be just as gloomy as their daughter.

After graduating from the Prometheus Academy, Cassandra would eventually become the most famous Prophet in all of Greece.

Cassandra has the involuntary ability to see the future (usually disasters), but is cursed so that no one ever believes her. When Cassandra has a vision, her eyes turn green and swirl around. A running gag is that when Cassandra makes sarcastic comments, Hercules and Icarus listen, but when she has visions, they rarely believe her. In Greek Mythology this is called the Cassandra truth. 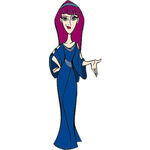 Cassandra has a vision.

Cassandra with her parents.

Just the typical sarcasm from Cassandra.

The king of Atlantis orders Cassandra to be tortured after accidentally revealing that Atlantis was fated to be destroyed.

Cassandra terrified as Pain and Panic discuss all the torture devices they will subject her to.

Herc to the rescue. The timing couldn't have been better as the torture was about to be administered to Cassandra.

Herc saves the damsel in distress.