Castle of Illusion starring Mickey Mouse is a Mickey Mouse video game developed by Sega in 1990. It was released for the Sega Genesis/Mega Drive, Master System and Game Gear.

In 2013, Sega released an HD remake of the game for PlayStation Network, Xbox Live, and Windows PC. In addition to updated graphics, new gameplay mechanics were introduced.[1]

Castle of Illusion is a side-scrolling game putting the player in control of Mickey Mouse in a magical quest to save Minnie Mouse from the evil witch named Mizrabel, who has kidnapped Minnie to steal her youth, beauty and mouse form. Each level exists within the large titular castle and the player must defeat enemies and bosses by jumping on them, or collecting apples and marbles to use as projectiles. The player can also collect icons to increase health, collect extra lives, or gain bonus points. After defeating one of the "Masters of Illusion", the player is given a gem. When all seven gems are collected, the player can build a rainbow bridge that allows him/her to walk into the castle's tower for a final battle against the witch (who in her youthful form resembles Queen Grimhilde). 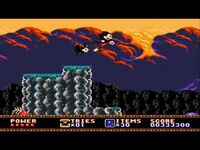 Mickey battling Mizrabel at the end of the game.

Mizrabel kidnaps Minnie at the beginning of the game. 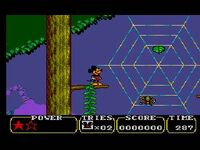