Sleeping Beauty Castle
Castle of Magical Dreams is the new centerpiece castle that replaced the Sleeping Beauty Castle at Hong Kong Disneyland on November 21, 2020, as part of the park's 15th anniversary celebration. The castle's redesign is meant to pay tribute to all of the Disney Princesses, including Anna and Elsa from Frozen.[1][2]

Although the castle officially opened on November 21, 2020, park guests began experiencing previews of the castle through special hotel and ticket packages starting September 25, 2020.[4]

The transformed castle features a seamless blend of styles inspired by different times and cultures while paying tribute to Disney Princess and Frozen stories, and takes the park's entertainment to new heights with both a new daytime show and nighttime spectacular. The design of the transformed castle takes inspiration from different times and cultures, as well as a variety of storybook influences and styles. Unlike most other castles in the Disney Parks, this castle's features are inspired by 12 much-loved Disney Princess stories based on Snow White, Cinderella, Aurora, Ariel, Belle, Jasmine, Pocahontas, Mulan, Tiana, Rapunzel, Merida and Moana, including Anna and Elsa from Frozen. Coming from the far reaches of Asia, Europe, the Middle East, and beyond, the Disney Princesses are a diverse group unified by their big dreams and courageous hearts.

From the new castle moat and hub area, guests are able to spot princess-inspired decorations on some spires, such as Snow White's apple, Cinderella's coach, Aurora's crown, and Belle's rose, as well as princess-inspired designs and decorations throughout the castle. To add even more magic and fantasy, the transformed castle area includes original artwork, unique sculptures, and designs waiting for guests to find and enjoy. As part of the castle transformation, guests can visit the all-new Bibbidi Bobbidi Boutique, which is a magical salon where fairy-godmothers-in-training turn young guests into princesses with makeovers, hairstyling, and special outfits. At the transformed castle, guests can also meet different Disney Princesses at different times.

There is also a new outdoor stage where Hong Kong Disneyland’s daytime show and nighttime spectacular will be held. Both of these new shows will feature awe-inspiring entertainment experiences, and be special moments for friends and loved ones to enjoy together.

The concept artwork in 2017

The concept artwork in 2018

A Castle of Magical Dreams Model

Back for Castle of Magical Dreams Model

Back for Castle of Magical Dreams Model 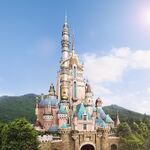