This article is about the 1951 animated character. For the 2010 live-action character, see Absolem.

Being corrected, being misunderstood, being eaten by birds, Alice not telling him her name, Alice laughing at him

Turns into a butterfly; later ceases to exist when Alice wakes up, as it was all just a dream

"Who are you?"
"How doth the little crocodile improve his shining tail, and pour the waters of the nile on every golden scale."

The Caterpillar is a character from Disney's 1951 animated feature film, Alice in Wonderland.

The Caterpillar smokes a hookah from which colorful smoke rises, forming letters, words, and even images that he refers to while speaking. He often over-enunciates certain words such as 'exactly' and 'correctly'. The Caterpillar has a passion for recitation and grammar, and unlike most of the residents of Wonderland, he appears more calm and collected and was one of the few willing to give Alice useful advice. He also has a rather short temper which can easily be set off if his height is mocked or someone fails to understand his hints. He appears to have rather poor memory, as he did not recall who Alice was during their second meeting.

After leaving the Garden of Living Flowers, Alice comes across the Caterpillar singing and smoking. After a rather confusing conversation, and an angry transformation into a butterfly, the Caterpillar tells Alice to take part of a mushroom to grow larger and a part on the other side to grow smaller. The Caterpillar, in Butterfly form, later reappears when Alice is attempting to escape being beheaded by the Queen of Hearts, only for him to ask who she is and blow smoke that warps her to a surreal smoke tunnel leading to the Doorknob.

The Caterpillar appeared in the episodes "Big Bad Wolf Daddy" and "Donald Wants to Fly".

The Caterpillar is one of the characters Jefferson and Regina encounter during their trip to Wonderland. He is reclining on a mushroom and smoking a hookah. He asks them, "Who are you?", like in the original book and the Disney adaption. After the encounter, Jefferson states that he hates Wonderland.

The Caterpillar appears in the spin-off once again. He represents in Alice's flashback memories before that she meets the genie Cyrus, stealing him a piece of the mushroom where he sits. He is later mentioned by Silvermist like the person in charge like the to have put Will Scarlett's head to capture. This latter, accompanied with Alice, visits him for to find the Forget-Me-Knot, the year valuable enchanted piece of rope, in his mushroom which turns out to be a den for the criminals of Wonderland. The Caterpillar turns out to be a Lord of the Organized crime with characteristics similar to Jabba the Hutt. The Caterpillar informs both heroes that the object is actually possessed by Grendel, a dangerous ogre and agrees to stop pursuing Will if he give the object. Will, after all, burns the rope, aware of the lack of morality from The Caterpillar. The Caterpillar is later visited by Jafar, investigating into Will.

While the Caterpillar himself doesn't truly appear in the game, a picture of him was among the ones in the rabbit hole room after The player and Jiminy Cricket lead Alice back to the door from Wonderland. Another reference to him includes several smoke images that are obstacles the player must click to avoid running into, including a white spade, a pink heart, and the golden crocodile that the Caterpillar formed in the poem he recited from the film.

The Caterpillar appears at the end of Chapter 1. His hookah is replaced with one that blows bubbles. He blows the player a bubble at the end of the chapter, which is used when the character is used as a croquet ball in Chapter 2.

The Caterpillar with green skin in House of Mouse.
Ca10.jpg
C9.jpg 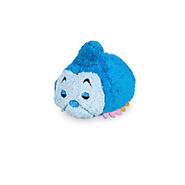 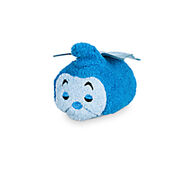 The Caterpillar in Once Upon a Time in Wonderland
Caterpillar300.jpg

Concept of the Caterpillar by Mary Blair. 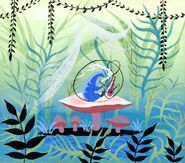 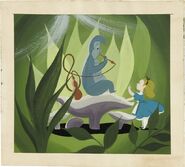 Concept of the Caterpillar meeting Alice by Mary Blair. 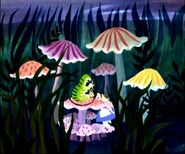 Another concept of the Caterpillar meeting Alice by Mary Blair.

Retrieved from "https://disney.fandom.com/wiki/Caterpillar?oldid=2981884"
Community content is available under CC-BY-SA unless otherwise noted.