Cameron (stepson), Dylan, and Carys
Catherine Zeta-Jones is a Welsh actress. She is known for her roles in films, such as Entrapment, The Legend of Zorro, and Chicago. She also voiced Marina in the 2003 DreamWorks animated film, Sinbad: Legend of the Seven Seas.

For Disney, she played Charlie Nicholson in the 2000 Touchstone Pictures film, High Fidelity and Velma Kelly in the 2002 Miramax film, Chicago. 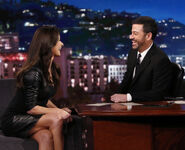 Retrieved from "https://disney.fandom.com/wiki/Catherine_Zeta-Jones?oldid=3987233"
Community content is available under CC-BY-SA unless otherwise noted.