The Black Cauldron
Once Upon a Halloween

Deceased
The Cauldron Born, also known as the Army of the Dead, are the undead minions of the Horned King in The Black Cauldron.

As some of the more nightmarish beings in Disney media, considering their undead nature, many of the deleted scenes of the film surround the waking of the Cauldron Born and their attacks. One of the more infamous cuts and one that an image of would find its way online would be a scene of the green mist from the cauldron melting the skin off the bones of one of his mortal soldiers. In the film, the Cauldron Born were animated by Phil Nibbelink and Ben Burgess.

Little is known about the personality of the Cauldron Born, other than the fact they are embodiments of violence and evil. Their goal is to destroy all living beings in their path.

The Cauldron Born are skeletons wearing many varieties of armor and weapons.

The primary reason why the Horned King is searching for the cauldron, he is often seen speaking to the dead bodies littering his castle. When the Cauldron finally gets into the Horned King's grasp, he calls upon its terrible power to awaken the corpses as the army of the Cauldron Born, who proceed to scare away all of his mortal minions on their way out of the castle and across the bridge into Prydain, killing a few in the process. However, they die again when Gurgi sacrifices himself to end the Cauldron's power. In disbelief of his deathless warriors returning to piles of bones, the Horned King attacks Taran before being sucked into the cauldron and also faces his demise.

The skeletons are then obliterated after the castle explodes.

In the episode House of Magic, the creatures were accidentally unleashed by Daisy Duck when she attempted to perform magic, despite being inexperienced.

The Cauldron Born appeared at the end of the Cinderella Castle Mystery Tour at Tokyo Disneyland, where the Horned King brought them to life to attack the guests. However, they were defeated alongside their master when a guest was chosen to use a magic sword to destroy the Cauldron and beat the Horned King with it.

The mist from the cauldron passes over the dead.

The undead start to rise up...

"Go forth, my deathless warriors!"

"Destroy everything in your path!"

The Cauldron Born in House of Mouse.

One of the Cauldron Born in deleted scene.

The horde marches on. 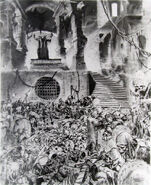