Disney Wiki
Register
Don't have an account?
Sign In
Advertisement
in: Characters, Jake and the Never Land Pirates characters, Females,
and 8 more

Cecilia returns in the episode "Season of the Sea Witch". She transports Jake and his crew to Pirate Princess Island to help the princess fend off her old foe, the Sea Witch, who plans on dominating Neverland, and turning the Pirate Princess into a gold statue once more.

Cecilia reappears in the episode "Trading Treasures". Cecilia and the Pirate Princess were preparing for Queen Coralie's Fin and Frolic dance party, when Jake and his crew pay her a visit. The young pirate team need a diamond to trade the Octopus for the Golden Glam-Shell. The princess regrets to inform her friends that her diamonds are currently kept in the Lands Beyond the Never Sea, but she still has one but Cecilia was planning on wearing it to Queen Coralie's party. Cecilia trades the diamond for Izzy's seashell necklaces. 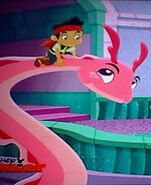