Celebration Europe III was a Star Wars Celebration fan convention that was held in London. It began on July 15, and ended on July 17, 2016.

It was a follow up to the two prior Celebration Europe events. It was announced at the closing ceremony of Celebration Anaheim in 2015.

There were lots of events, such as Rogue One panel, Rebels panel with a screening of Star Wars Rebels Season Three premiere and much more. 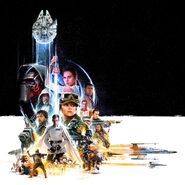 Official Poster of the Convention
Add a photo to this gallery

Retrieved from "https://disney.fandom.com/wiki/Celebration_Europe_III?oldid=3341517"
Community content is available under CC-BY-SA unless otherwise noted.