Hercules
Once Upon a Time

Guardian of the Underworld

Hades (formerly)
Cerberus is Hades's three-headed guard dog whose main duty is to guard the entrance to the Underworld. He made his first appearance in Hercules.

Cerberus first appears when Hades is riding down the River Styx and is fed a massive steak (which the three heads fight each other over). Later, Hercules tames the beast and uses him to get to Hades' inner sanctum, though this is only a temporary turn driven by fear.

Cerberus made a few appearances in the series as a rambunctious puppy that Hades has difficulties in controlling.

Cerberus's largest role in the series was in the episode "Hercules and the Visit From Zeus" while plotting another scheme to take over Mount Olympus, Hades is interrupted by a playful Cerberus who makes off with a model of Olympus while attacking Pain and Panic. Later, Hades is dragged across the Underworld while walking the pup, when Cerberus discovers the Fates all seeing eye much to the annoyance of the three hags. Hades retrieves the Fate's eye from his monstrous mutt when he gets a glimpse of a mortal. The Fates reveal that mortal was Zeus. Seeing a golden opportunity to rid himself of his brother once and for all, Hades sends Cerberus after Zeus. The episode also revealed that Cerberus was a gift to Pain and Panic from Hades, as the two were said to have pestered the latter for a pet.

Cerberus later appears in the episode "Hercules and the Underworld Takeover". Cerberus appears alongside the Fates and Hades's other underlings snarling at Hecate until she commanded him to sit during her hostile takeover of the Underworld.

Cerberus makes a cameo in the episode "Hercules and the Comedy of Arrows". Pain and Panic get their hands on the extra loathe arrows Icarus created when Cupid tried to dispose of them. They return to the Underworld with the arrows much to Hades's fury for mistaking the loathe arrows for Cupid's love arrows. Hades throws one of the loathe arrows out of the window of his lair on to a sleeping Cerberus now, fueled by the power of the arrow attacks Pain and Panic.

Cerberus makes a cameo in "Hercules and the Tiff on Olympus", where Zeus was hearing Hercules's calls for help and Cerberus chews on Zeus's cloud.

Cerberus appears during the song "Surface Pressure" when Luisa ponders whether or not Hercules considered bailing on fighting Cerberus.

Cerberus appears in the episode "Labor of Love".

Cerberus is a three-headed beast from the Underworld that Hercules has to defeat to finish his Twelfth Labor. Before Hercules can confront the hellhound in the Enchanted Forest, he runs into Megara, who is running away from it. He urges her to keep running, while he stays to fight Cerberus. During the battle, Hercules goes for one of Cerberus' heads, but he is unable to fend himself from the two other attacking heads. He is eventually killed by Cerberus, who goes on to chase down Megara and kill her as well. Both Hercules and Megara left with unfinished business because of how they died, end up in the Underworld.

In the Underworld's underground prison, Megara remains trapped, unable to escape because Cerberus keeps a watchful eye on her. Another prisoner, Hook, convinces her to break out with him, but as soon as they begin making their way through the tunnels, Cerberus' roar warns them that they are being pursued. Before they are cornered, Hook allows Megara to flee on her own, telling her to find Emma once she gets out. Hook is left to fight off Cerberus, who slashes him several times on his neck, and he's saved only when Hades takes him away to his lair. Cerberus continues to stalk Megara, finding her in the woods, but Emma manages to teleport herself, Megara, and Regina away before the hellhound reaches them. Mary Margaret enlists Hercules' help to kill Cerberus, in the hopes of finding Hook, as well as clear away Hercules' unfinished business. With Emma, Regina, and Mary Margaret, Hercules enters the mines to look for the beast, eventually venturing deeper in by himself. Coming face-to-face with the glowing eyes of the three-headed dog, Hercules becomes terrified and runs back to his party. The group, hearing Cerberus quickly approaching, prepare to attack, only for Hades to call off his pet. From Hades, Mary Margaret learns of Hercules' greatest shame, that he died fighting Cerberus. Later, she asks for details about the battle, in order to figure out why he lost in the first place. When Hercules admits the two other heads of Cerberus were too much for him, Mary Margaret realizes he needs two other people to kill the creature. Cerberus, tracking Megara to an apartment, slams into the building seconds before she escapes. Joined by Hercules and Mary Margaret, Megara teams up with them, with each person taking out one of Cerberus' heads. After all heads are incapacitated, Cerberus dies, dissolving into black dust. 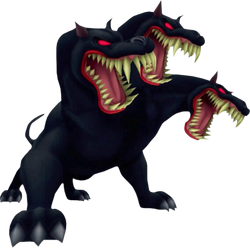 Cerberus appears several times throughout the Kingdom Hearts series, usually as a servant of Hades.

In Kingdom Hearts, he ruins the Games by battling Hercules, although Sora, Donald, and Goofy step in and defeat him. This deed earns them the titles of "Junior Heroes". Cerberus appears again as the twentieth opponent in the Hades Cup.

In Kingdom Hearts II, Hades sends Cerberus after Sora, Donald, Goofy, and Auron, who were escaping from the Underworld. The chase ended with the quartet managing to get away from the beast after a battle.

The Disney Wiki has a collection of images and media related to Cerberus.