Chad Danforth is one of the main characters of the Disney Channel Original films, High School Musical. He is a student and basketball player at East High School and is best friends with Troy Bolton. He is also the main love interest of Taylor McKessie.

Chad has chocolate brown eyes, curly hair, high cheekbones and a strong jawline. He also has a straight nose and full lips. He‘s a very athletic body and the height to match, he's ripped. Hitting the gym every other day, along with playing basketball constantly, he has defined muscles.

Chad is on the East High Wildcats with his friends Troy, Zeke and Jason. They're ready to celebrate a brand new year. The big game is in two weeks and Chad worries about his friend Troy auditioning for a musical. Chad works with Taylor to get Troy to say bad things about the musical and Gabriella. It makes Troy sad since Gabriella won't even talk to him. Troy decides to sing with Gabriella. Kelsi helps them when everything is on one day. During the game Troy goes to sing with Gabriella and Chad is there cheering for his best friend. When the game is over Chad asks Taylor to come with him to the after party.

It's the last day of school before summer vacation. When the school bell rings everyone starts singing What Time is It?. The boys start talking about looking for summer jobs. Chad says that he's saving up for a car. Later Troy gets everyone jobs at Lava Springs Country Club. When Sharpay starts to pull Troy away from Gabriella and all his friends Chad gets worried. Chad thinks that Troy is acting weird and starts fighting with him. Troy decides not to do the show with Sharpay and apologizes to the Wildcats. Chad and Troy make up and Ryan still thinks that Troy should sing with his sister. Troy says that he's cool with it and they want him to learn a new song called "Everyday." However Troy doesn't sing with Sharpay he sings with his girlfriend Gabriella. The next day everyone has a huge party at Lava Springs for all of their hard work.

The wildcats in the middle of the big championship game against the West High Knights basketball team. The buzzer sounds, and East High is down. The Wildcats sulk back to their locker room, but Coach Bolton tells the team to ignore the X's and O's. There are only sixteen minutes left in this game, and only 16 minutes left for the seniors to wear a Wildcats basketball uniform. Troy and Chad then lead the team out, to the song "Now or Never." They win, to thunderous applause and with Troy actually drawing the attention of the rival team away before passing to sophomore Jimmie "The Rocket" Zara for the final basket.

Troy and Chad are next seen pushing Troy's smoking pickup truck in front of Troy's house, where a huge party is being held to celebrate the Wildcat win. Troy's dad introduces him to the coach of the basketball team at the University of Albuquerque, and everybody seems to accept that both Troy and Chad will be going there in September.

The Next Day in homeroom Taylor Taylor address the group. She mentions that seniors can get their prom tickets from Martha Cox, and also talks about handing in yearbook photos and other activities. Chad tries to tease her by asking what's the lunch special, to which Taylor has an answer. Miss Darbus then asks Sharpay to outline her plans for the "spring musicale", and Sharpay says that with all the activities taking so much time for everyone, she thought maybe it should be a one-woman show. Kelsi immediately starts writing at great speed on a clipboard, and when Miss Darbus asks if sign-ups are that light, Kelsi replies that no, there's a good turnout, actually. Miss Darbus looks at the sheet, and says that it seems everyone has signed up, and she'll look forward to seeing all of them during free period, as well as being able to make a special announcement at that time.

Kelsi is followed by a horde of complaining students, all saying they had different plans for their free period instead of rehearsing a musical. Tiara follows Sharpay in, and thus is able to catch her when Sharpay faints on learning that the spring musicale is about "all of you"-- the entire senior class, and their last year in high school. But Gabriella makes a plea for them to consider doing the musical, as their last chance to do something together. The main group still are uninterested, until Troy declares that he's in.

The Next Day Troy and Chad then find Jimmie and his friend Donny coming out of the showers from gym class, and since the younger boys both want their idols gym lockers, Troy and Chad explain that those lockers have to be "earned." They then race through the gymnasium and a girls' volleyball game, the auto shop, and into the drama department with the boys' clothes, while Jimmie and Donny clutch towels around their hips and run to try and catch up. They suddenly stop on stage, and Taylor quickly snaps a photo for the yearbook while Miss Darbus states that while the stage is a wonderful place to discover oneself, at East High it is best to do so clothed.

Troy and Chad are next seen presenting Taylor with a tray of something Zeke baked fresh from the oven. Taylor and Gabriella congratulate them on kissing up to the editors of the yearbook, and Troy teases that Chad is hoping to have two pages fully to himself, with a third page solely for his hair. Chad then casually refers to Taylor going with him to the prom, and she stops him by saying that she wants an invitation, which that wasn't. Troy then meets Chad in the cafeteria, and gives him a bouquet of wildflowers from the roof garden. Chad tries to ask Taylor to be his date, but she pretends to misunderstand because of all the noise. Troy hollers for quiet, and Chad stands on a table opposite Taylor, Gabriella, Kelsi and Martha, before pleading for Taylor to be his date to the dance. The four girls huddle as though talking the pros and cons over, before Taylor stands and accepts him with an enthusiastic hug.

"A Night to Remember" follows, going between the boys getting tuxes and not being sure about all the fuss while the girls are gleeful about everything. The scene moves into bits that are parts of the Spring Musicale, with the boys collecting the girls from their parents' houses and being blown away by how beautiful the girls are, etc. Kelsi and Ryan make a particularly spectacular entrance during this song, and Chad's tuxedo has his surname Danforth and the number 8 on the back. When the dance number ends, Miss Darbus applauds from the audience, congratulating everyone on how things are going.

Troy and Chad are next in a car parts junkyard, and the owner congratulates them both, telling them he's already bought season tickets for the next basketball set for the University of Albuquerque. Troy starts to explain to Chad that he might want to do different things in the future than what they originally always planned, and "The Boys Are Back" follows, with a big "Thriller" style dance number in the junkyard, even briefly showing the boys as eight-year old versions of themselves playing in the same yard.

Troy and Chad come into the Bolton kitchen, and Troy shows his mother the suit he collected from the rental place for the prom in two days. As if on cue, Gabriella phones, but Troy is soon heartbroken when she explains that she won't be coming back for either prom or graduation.

Chad tells Troy that "you don't take the girl from high school with you," and says that Gabriella is one step ahead of them as usual. He says that she'll be there at Stanford, while he and Troy will be in Albuquerque, and it'll be a "whole new ball game." But Troy says he isn't sure he wants his life to be a ball game anymore, leaving Chad perplexed. Chad then says Troy should be with his friends for the prom, and Troy responds that he doesn't plan to miss it.

Soon the musical happens and everyone performs except for Troy and Gabriella. Jimmie becomes Troy's understudy. Soon Troy and Gabriella come to save the show. Miss Darbus finally reaches "a Wildcat, who I believe has a decision to make." Troy steps forward, and declares that he has chosen basketball, but also theater, and that the University of California, Berkeley, will let him pursue both. Most of all, he has chosen to follow his heart, and chosen the school that is only 32.7 miles from where Gabriella Montez will be going to study pre-law.

Miss Darbus starts to announce where Chad will be, only to see that young Danforth has fled the stage. Troy knows where his best friend will be, and finds Chad shooting hoops in the gym again. Chad stops, and asks seriously whether Berkeley will play basketball against Albuquerque, and Troy grins. "I believe we'll be kicking Redhawk butt in November," or something to that affect. The boys start chasing each other with the basketball, until Troy's dad shouts for them to get back on the stage.

It soon becomes graduation day and Troy gives his speech. Everyone throws their caps into the air and starts dancing to the song High School Musical. 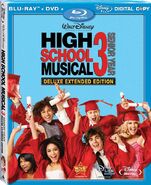 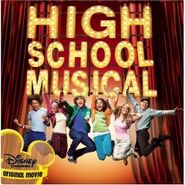 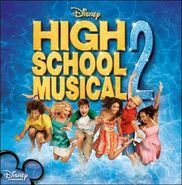 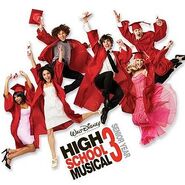