"Chad Dylan Cooper is the greatest actor of our generation."

Chad Dylan Cooper is one of the main characters of the Disney Channel series, Sonny with a Chance. He is a famous actor who plays Mackenzie on the teen-drama series, MacKenzie Falls and has a heated and hated rivalry with the cast of So Random!. He is also the main love interest of Sonny Munroe.

He usually wears the MacKenzie Falls cast uniform, but outside of the studio he dresses casually. He believes that comedy only involves being "funny", something that he thinks is stupid. He is also an enemy of So Random!, which he often refers to as "Chuckle City". Despite his constant antagonism with the So Random! cast, Chad is capable of working with them in some cases, occasionally treating them civilly and even engages in casual conversations with them on multiple occasions.

Despite his egotistical and selfish behavior, Chad can be very caring and compassionate, mostly towards Sonny. While dating Sonny, he had a changed personality, but he would rather choose himself over Sonny. Chad has a wall of pictures of people banned from visiting the set, including Grady, Nico, Sonny, Tawni, Zora, and Zac Efron. When Zora asks why Zac Efron is on his wall, Chad states: "Cause it's my wall, and I like saying I banned Zac Efron. There will come a day when Zac Efron comes knocking on that door and he's like, 'Hey, can I come in?' And I'll be like, 'Oh no, you're banned!'" (Which is ironic because Sterling Knight's first movie was with Zac Efron). Sonny is later removed from the wall because of her and Chad's relationship. Sonny never was on the wall, though.

In "Three's Not Company" when Sonny refused Chad's party invitation, he said that he would really expect being turned down by a Tisdale or a Montana. In "Fast Friends" Chad rents a dog (named Cupcake) (which cost him $60 bucks an hour) which he lets Sonny see, to make up for making himself look bad on television (In his YouTube account, he claims that after his hour with the dog, he buys his own company and calls it 'Rent-A-Dog.'). In "You've Got Fan Mail", Chad dresses up as "Eric", Sonny's fake number-one fan, in order to protect Sonny from embarrassment. Chad said that the only reason that he dressed up as Eric was because "I just wanted to try on the weird beard." When Sonny noted that this showed he really did care, he repeatedly denied it until she tricked him into confirming it. In "Sonny and the Studio Brat", Sonny revealed that Chad thinks Miley Cyrus and Hannah Montana are actually two different people.

To make James Conroy jealous, Sonny went on a fake date with Chad in "Sonny With a Chance of Dating". Sonny fake-kissed him by putting her hand over his mouth before the "kiss," but Chad said that he was going to post on his blog that they really did kiss. In "Promises, Prom-misses", Sonny un-invited Chad to her secret prom, so he felt a bit hurt and came to the prom anyway. There, they shared a moment after everyone left.

In episode 13, "Battle of the Network's Stars", Selena Gomez guest starred and tried to draw Sonny and Chad together, but they persistently denied their feelings for each other. Selena even kissed (or pretended to kiss) Chad because that was what she thought Sonny would do. She also said "You two are... PERFECT for each other!" Which later on in the series, was proven true, as Sonny and Chad began dating in "Falling for the Falls".

At first, Chad has a love/hate relationship with Sonny Munroe. Chad and Sonny have feelings for each other which are denied until, in "Battle of the Network's Stars", they realize that they do. He even says that Sonny and everything she does is cute while jealous about James and Sonny dating in "Sonny With a Chance of Dating". He is not as mean and heartless as he seems (He tries to pretend to not care about Sonny, but Tawni and James can see through him). Chad tries to hide the fact that he likes Sonny by acting like they are rivals. Chad even takes the long way to MacKenzie Falls set pass the So Random! set and always bumps into Sonny in odd locations. In "The Heartbreak Kid", Chad and Sonny go on a second "fake date" at Lookout Mountain. In "Guess Who's Coming to Guest Star", just before the "Hot E.M.T" sketch starts Chad said that he and Sonny will be in love, accidentally letting it slip that he loves Sonny, then correcting himself unconvincingly.

In "Falling for the Falls", a misunderstanding prompts Chad to ask Sonny out. She says yes, but the attitudes of the other cast members of So Random! upset her and she cancels on Chad, sparking an argument. Later, he comes to her house with gifts and an apology. They go on a date the following day, but Chad gets so nervous he throws up, ruining the date. Humiliated by the bad publicity this brought him, he tells Sonny he doesn't want to see her in public. Hurt, she breaks off the relationship. Realizing his mistake, he makes his feelings for her publicly known, winning her back, and Sonny stops lying to her fellow cast members, deciding her relationship with Chad is more important than their opinions. They aren't currently dating. They are not together as of the moment, because of a recent breakup in Sonny With a Choice.

It comes to mind though, that Sonny seemed to occasionally break up with Chad, but never Chad breaking up with Sonny. Must mean that Chad truly has strong feelings for Sonny and always will. Chad is a changed man ever since he started dating Sonny. In That's So Sonny, Chad kept choosing Sonny over Amber and said that She's the only fan who he really cares about. Chad would do anything to make Sonny happy, until the point where she broke up with him each time.

He and Sonny dated, although their respective shows are rivals and they didn't care that their shows were enemies.

Portlyn co-stars with Chad in the hit tween drama MacKenzie Falls. They are just friends and they are also seen to hang-out with each other behind the camera. Chad said to Sonny that perhaps there would be a spot for her on MacKenzie Falls, after Portlyn disappears in a mysterious "ballooning accident". Portlyn then comically sobs and walks out of the room. (West Coast Story)

Zora and Chad don't get along at all. In Prank'd, Zora successfully pulled a prank on Chad. In Sonny in the Middle, it is seen that Zora tricked Chad for ice cream instead she took him to see "Giraffes on Ice" an animal morgue and in the near ending it is seen that both Chad and Tawni are with Zora watching Monkey Cars 3D. In My Two Chads Chad was seen crawling around in vents, something Zora often does to spy on people.

Wesley plays young Mackenzie on MacKenzie Falls. Wesley has a huge crush on Sonny, and Chad tells him to back off. He gets fired at the end of the episode Zora Blossoms. He has only appeared in that episode. (so far)

Tawni and Chad had a conversation about Sonny and James and bibs in "Sonny With A Chance Of Dating". It is known that Chad and Tawni have known each other from an early age as they both had roles on the children's show, The Goody Gang, when they were little. In "Chad Without a Chance", Tawni asked Chad to break up with her boyfriends for her. Chad confused the "Absolutelys" without the "Absolutely Nots" and was fired at the end of the episode.

Chad, Nico and Grady always occasionally have the "Guy" bond most of the The Guys of Sonny with a Chance in Season 2. In Gummy With a Chance, Chad offers Grady and Nico to use his private gym to work out. Even though for his own evil scheme at the time, it gave Nico and Grady the fitness advantage. In The Problem with Pauly, Chad was waiting along time for Sonny to come for their 7 weekaversary. But Nico and Grady had convinced Chad that he was stood up. They even continuously said "Join us Chad... You could be player 3". When Chad walks in the Prop house with roses, Nico mistakingly says "Awww, Dude you shouldn't have".

In "That's So Sonny", Nico and Grady admit to Amber's disguise "Smooth" that they didn't mind that much associating with Chad now since Chad had started dating Sonny.

Amber Algoode was the Chad Dylan Cooper Fan Club president. They had a good relationship until she says Sonny is the cause of him not getting his million fan on "Flitter." She then kidnaps Chad along with Tawni, Nico and Grady. Sonny then, comes to the rescue. 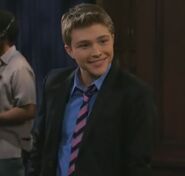 Add a photo to this gallery
Retrieved from "https://disney.fandom.com/wiki/Chad_Dylan_Cooper?oldid=3905242"
Community content is available under CC-BY-SA unless otherwise noted.